How I Lost 34 Pounds: Thomas Drops Weight With Fitness And Becomes A New Man 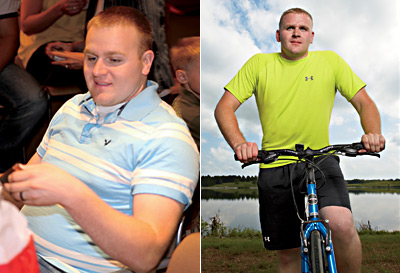 Thomas Oelschlager’s desk job and poor diet left him at 220 pounds. He made the commitment to get healthy, and 7 months later he looks like a new man

THE SETBACK: I ran cross-country in high school, and after graduation I enrolled in college and the Marine Corps Reserve. Then I kicked back. I’d earned it, right? Pizza and beer became my diet. The reserves required me to train only one weekend a month, so I coasted through. Then, after I graduated from college, I took a desk job and developed a fondness for sitting around all day. By the time the reserves really needed me—I was facing deployment to Iraq—I was hardly in fighting shape.

THE WAKE-UP CALL: A month before I was deployed to Iraq, I got married. On our honeymoon cruise to Mexico, I did a bit of snorkeling and a lot of eating. When I saw the photos, I realized how far I had let myself go. (Beat the five worst weight-loss traps for guys.) My deployment became a chance to turn things around: I’d be away from my routine and able to whip myself into shape.

RELATED:   How I Lost Weight: Nicole Lost The Freshman 15 Pounds And More

THE FOOD: My first challenge: I had to eat my meals in a cafeteria. So I adapted. I banished white bread from my diet; if chicken sandwiches were on the menu, I’d toss the bun. I began every meal with a big salad, filling up with few calories. But I’d go crazy without some sweets, so every Sunday I added ice cream as a treat.

THE FITNESS: I won’t lie—I often lost the motivation to go to the gym, especially early on. (Learn 20 ways to stick to your workout.) That’s why I enlisted the help of a friend. Sure enough, on the days when I didn’t feel like leaving the couch, he pounded on my door and yelled for me to hurry up. I started each workout with about 10 minutes of stretching and followed that with 2 to 3 sets of exercises, such as pullups, squats, pushups, hip raises, and reverse crunches. Then I’d end the workout with about 20 minutes of high-intensity interval sprints.

THE REWARD: I came back from 7 months in Iraq looking like a new man. Now it’s time for a real do-over: I booked a Royal Caribbean cruise for my wife and me, and I’ll be proud to display the pictures. I plan to eat well—hey, it’s a cruise—but balance is key. I’ve learned that no matter where you are, there are ways to keep active. The ship has a gym, a climbing wall, and a mini-golf course. And now that I’ve lost the weight, I feel ready to conquer them all.