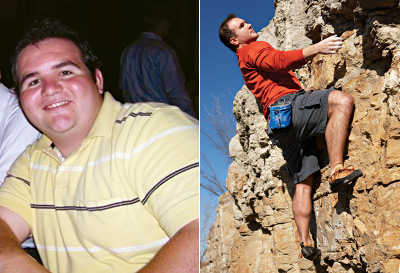 The Setback I used to excel at any sport I tried. I rocked my college’s intramural softball, volleyball, and soccer leagues, and I was captain of my school’s bowling team. (Hey, it’s a sport!) After graduation in 2005, though, my job required me to move four times. Each move meant anew cityand new friends, and where I’m from, people bond over two things: beer and greasy food. Fitness fell by the wayside, and I ballooned. When I joined a slow-pitch softball team in Omahain the fall of 2007, I was winded after just jogging the bases. If I kept up the unhealthy habits, I’d have to stop playing the sports I love.

The Wake-Up Call Nebraska winters aren’t pretty. The cold wind feels like it’s carrying nails. But in December 2007, as I was standing around with three buddies, I realized they were all wearing thick jackets while I was in a paper-thin T-shirt–and sweating! I was stuck with layering I didn’t want: 50 extra pounds of fat around my waist. I thought about that, and then about all the parties I’d been going to, and the burgers, pizza, and Chinese takeout I was scarfing down every week. I saw the connection. It was time to stop.

The Food First, I cut out the greasy pub grub and fast-food lunches. I was eating them because they were quick and easy, but I realized that with a little planning, I could be healthier and even more efficient. I now cook all my week’s meals on Sunday afternoon, and include a lot of chicken, fish, broccoli, and brown rice. I track what I eat, and I’m never tempted to pop into a McDonald’s. I also cut out booze. Sure, partying every night can help you make friends, but it also makes you feel sloppy and sluggish the next day. The tradeoff just wasn’t worth it.

The Fitness In a year I’ve gone from not exercising at all to working out six times a week. The secret is having realistic expectations: I set daily, weekly, and monthly goals, and log all my physical activity in a daily fitness journal. This helps me track my progress and keeps me focused on what I still have to accomplish. And because I like to socialize after work, I often do my workouts in the morning. I start around 5 a.m. and alternate between weight and cardio days. That way I’m finished in an hour. The early-morning routine may sound brutal, but my days feel so much more energetic when I start them so actively.

RELATED:   Weight Loss Before and After: Stephanie Went From Moody And Miserable To Confident And Happy Afer Losing 56 Pounds

The Reward I thought my social life would suffer without the booze and the burgers, but it’s actually better than ever. I’m finally able to excel again in sports, and I’m making a lot of friends along the way. This winter I’ve been skiing, snowboarding, and mountain climbing. I’m also dating again—a challenge that’s often more frightening than scaling a mountain, but now I have the self-confidence I lacked as a heavier guy. That’s half the game right there.