Male Before And After Weight Loss: Randy Drops 23 Pounds By Cutting Out Pizza 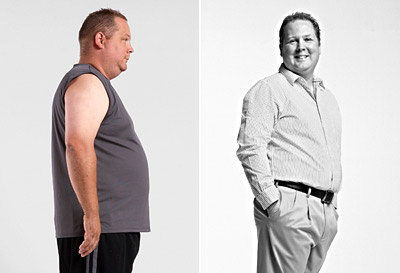 Randy Sumey and his wife wanted to get healthy together. With help from the Diabetes DTOUR Diet, he lowered his blood sugar 182 points!

I was recently diagnosed with type 2 diabetes. When my doctor told me, I wasn’t surprised. My father had it, and my 16-year-old son, Justin, was diagnosed with it 3 years ago. Justin was at 260 pounds then. Not anymore, though. He lost all the weight with help from a nutritionist who taught him how to make proper food choices. When he was diagnosed, my wife, Kris, and I were committed to helping him get healthy, but he did most of the hard work himself. He took control of his health. I knew I had to do that, too. My doctor told me I’d have to take medication, but if I lost weight, I might be able to stop one day. That motivated me. I don’t want to take pills for the rest of my life. So when Kris heard about the DTOUR program and suggested that we try following it together, I thought I’d give it a shot. I didn’t expect to lose much weight; in fact, we were told not to expect to lose more than 8 pounds in a month. But the scale just kept going down, down, down. Not that it was easy. It was tough to adapt to the smaller portions. When you work hard all day like I do, you want to come home to a nice meal. What I’ve learned is that you have to redefine “a nice meal.”  I think we are.

Whip up a 30-minute diabetes-friendly meal.

We hardly eat out now, too. We had stopped ordering from the local pizza place for a month, and a delivery guy showed up out of nowhere with a free pizza. They were worried about us! Justin is our primary motivator. If Kris and I eat something we shouldn’t, he says, “Put that away.” I was impressed with the way he helped us stick with this program. I’ve tried some new foods that I like; hummus is my favorite. We’ve learned to be conscious of portions. I can’t believe the amount of food we used to eat at one sitting! My migraines have also improved. I used to get them if I waited too long between meals. Now that I eat every 2 ½ to 3 hours, I haven’t had one. I feel really good. My clothes fit better. I’ll definitely continue the program. My main goal is to get off my medication and get down to between 200 and 220 pounds. When I started DTOUR, my fasting blood sugar was 281; at our final check-in, it was 99. So I’m hopeful that one day, I won’t have to take medications at all. I look forward to being healthier and having even more energy than I do now. I want to be around for my kids, too; I want to play football with my son without having to sit down so often. I want to be an example for him as much as he’s been an example for me.