Men Before And After Weight Loss: I Lost 40 Pounds And Ran My Way To A Healthier Heart

A trip to the cardiologist’s table forced firefighter Bill Sorrell, 48, to give up his unhealthy eating habits, start running, and drop his excess weight 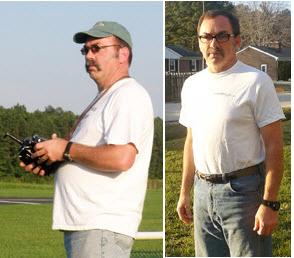 Bill Sorrell, 48, worked as a firefighter in the US Air Force for 20 years, serving in the Gulf War and other conflicts around the world. Just before he retired in 2001, Bill was diagnosed with psoriatic arthritis, which prevented him from being physically active, and after three knee surgeries, his weight hit 225. “I got in that spiral of the worse I felt, the less I wanted to do, and the less I wanted to do, the worse I felt. It took its toll on me,” he says.

The Turning Point
In the spring of 2010 Bill was rushed to the hospital in an ambulance with severe chest pains. “I had become ‘that guy’ who we always talked about at the fire house,” he says. Following an inconclusive examination Bill was sent home. A few weeks later he was hit again with chest pains, and this time he couldn’t breathe. Before he knew it, Bill landed on a cardiologist’s table where he had to have a heart catheterization for a blockage. “The doctor told me I would be back to see him soon if I didn’t change things,” Bill remembers. “So I made a decision right then and there to do something.”

The Lifestyle
First Bill cut out all fast food, which had been his typical lunch for years. Then he trimmed sweets and soda from his diet and made an effort to integrate healthy foods into all of his meals. “I ate fruits and vegetables as opposed to Twinkies, and stayed away from fried food,” he says.

Bored with the elliptical machine, Bill began taking walks outdoors, and one day decided to start running. “My goal was to run for 30 minutes at a time, and then I kept increasing my times until I was running for about an hour 3 to 5 days a week.” Officially bit by the running bug, Bill began registering for races, and finished fifth in his age group in his second 5-K. He decided to up the ante and eventually ran a half-marathon challenge as well as a Tough Mudder race. “It was by far the hardest thing I have ever done,” he says. “Finishing that event made me feel stronger and more alive than I ever have in my life.” He logged about 850 miles in 2011 and is looking forward to running a full marathon in March.

RELATED:   Weight Loss Before and After: Tracy Lost 40 Pounds By Carving Time Out For Herself

The Motivation
The promise of better health and a longer life help Bill stick to his plan. “I don’t want to ride in an ambulance again,” he says. “Working in the back as firefighter is great; but I didn’t like laying on a gurney.” He also looks forward to being around for his kids.

The Reward
Crossing the finish line at Tough Mudder remains one of Bill’s most cherished memories. “I never dreamed I would be able to accomplish a task like that. Not only did I complete it, but I was the team leader of a much younger team who had a harder time than I did.”