Male Before And After Weight Loss: Kris Sheds 107 Pounds And Starts Doing Triathlons 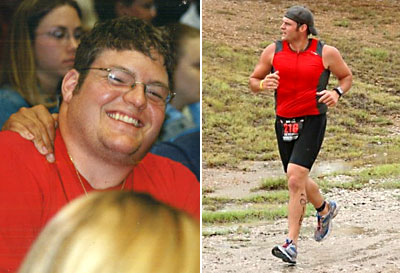 Kris Dornan used to weigh over 300 pounds and had 35% body fat. Now he sports an athletic build—with only 15% body fat—as he trains for his first Ironman

Kris Dornan, 28, played college football at Pittsburg State University in Kansas, where he thrived on Chinese buffets and 25-cent wings. His weight topped out at 320 pounds before he increased his exercise regimen and got down to 295 pounds at graduation. He slowly lost another 50 pounds over the next 4 years, mostly by changing his diet. Then a death in the family forced Kris to reevaluate his life, and he vowed to get healthy for good.

Discover 20 convincing reasons why you should train for a triathlon.

In January 2009, Kris, a capital markets sales rep from Wichita, KS, learned that his father had died of a heart attack at age 58. Determined to stick around and watch his little girl grow up, Kris began training for triathlons to get in shape.

Want to start running but don’t know where to begin? Learn how to run your butt off.

As a postgrad, Kris read a variety of health magazines to learn nutrition basics. “Getting out of college made me grow up and realize that fast food isn’t a food group, and you can’t live on beer as your only drink.” He attributes 60 to 75% of his weight loss to eating right and understanding how food benefits or harms his body.

Though he scaled back his intake of fast food, he didn’t eliminate it completely because his two children, ages 2 and 3, still request it on occasion. The difference is that now he’ll order apple dippers instead of fries at McDonald’s. His family also started cooking more, especially with ingredients like whole grains and produce from the farmers’ market.

Two years ago Kris shifted his exercise focus from weight lifting to aerobic activities like biking, swimming, and running. Since then he has completed a half-marathon and a half-Ironman in Lawrence, KS. He plans to complete his first Ironman in 2012.

Kris says it’s hard to juggle family life with his career and triathlon training, but on a good week, he works out about 10 hours. His schedule looks something like this: He hops on the bike at 5 a.m. on Tuesday and rides for an hour. He swims 45 minutes before work Wednesday morning and runs 30 to 45 minutes during his lunch break. He starts Thursday with a 45-minute swim and ends the day with a 60-minute bike ride. He squeezes in 45 minutes of running on Friday whenever he can—either during lunch or after work. Saturday is reserved for a 2-hour run. He heads out for a long ride on Sunday. Monday is his recovery day.

RELATED:   Weight Loss Before and After: Kathy Loses 130 Pounds And Wins The War On Fat

Kris keeps a picture of his old former self on his phone to show people. “It’s partially to brag but more so to show others [weight loss] can be done,” he says. He remembers how he successfully lost weight and that he could do it again if he had to. He considers any minor setback, like a bad day or week, a small hill and not the mountain he had to climb the first time.

The youngest of three children, Kris inspired his older sister to start losing weight last year. So far, she’s down 41 pounds, which fills him with pride. Motivating an older sibling is a difficult feat, he says.

Skip the diet du jour. “Make it a lifestyle change. Fads don’t last long and they come in cycles—they’re not what you want when your health is involved.”

Take it one day at a time. “Celebrate the small victories. A bunch of them can equal your big goal.”

Get more tips on healthy ways to lose weight.

Related Items100 Pounds LostOver 100 Pounds LostrunningSEOswimming
← Previous Story Men Before And After Weight Loss: Benjamin Cuts 47 Pounds And Gets Ripped To Compete
Next Story → How I Lost 69 Pounds: Mark Drops The Weight For Her And Him