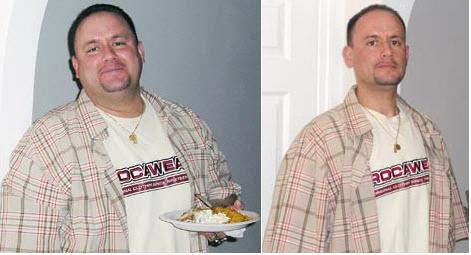 Anthony Nieves, 37, decided to take control of his health for the sake of his son

Self-esteem had never been a problem for big guy Anthony Nieves, 37—he matched it with a big personality. He topped 300 pounds by the end of high school, but never lacked friends or confidence. Still, a diet of late night Chinese takeout, soda, and juice took its toll. Anthony’s weight made breathing difficult. His blood pressure was high, and his bloodwork erratic.

The Turning Point
Anthony’s parents would frequently confront their only child about his weight. They’d send him newspaper and magazine clippings about weight loss and bring up his destructive lifestyle during phone calls. After one such conversation, something changed. “I realized that I had had enough,” says Anthony. “Not only did I owe it to myself, but I also owed a fresh start to my amazing parents and my own only child.”

The Lifestyle
For Anthony, drastic weight loss called for drastic changes. In April 2010, he cleared out his entire fridge, freezer, and pantry and bought healthier versions of the foods that were previously there. He looked for foods that were higher in fiber and lower in calories, such as beans and veggies. However, his biggest change was eliminating excess salt. He threw out his salt shaker, replaced his salty spices, and chose sodium-free canned foods. “I think that I dropped my first 70 to 80 pounds just by watching my sodium intake,” he says.

RELATED:   Weight Loss Before and After: Michele Shed 77 Pounds And Won The Texas Shedder Classic

During the first month of his life makeover, Anthony didn’t exercise, but slowly he started walking on a treadmill for 30 minutes. “I didn’t feel comfortable taking a trot around the block and wanted to stay indoors. But this was my project,” he says. Now he jogs for over an hour four to five times a week.

The Motivation
Anthony set the goal of dropping 100 pounds by December 24—8 months after his start date. “It was going to be my Christmas gift to myself,” says Anthony. By November he was down 95 pounds, and by Christmas he had lost 105 pounds.

The Reward
Now that he’s regained control of his health, Anthony is confident that he’ll be able to see his son grow up. “Knowing that my son looks up to me and showers me with his unconditional love keeps me motivated,” says Anthony. “The best way to repay my son for the love that he gives me is to provide him with the love and support that I can now give thanks to my better health.”

RELATED:   I Lost 145 Pounds: Shirley Had An Aha Moment And Changed Her Lifestyle To Lose Weight

Anthony’s Tips
Cut the salt. “Eliminate extra sodium from your life. Get rid of any and all salt containers and seasonings that contain salt.”

Get at least 35 minutes of exercise a day. “I use a treadmill when I’m not jogging outdoors. Start low on both the speed and incline, and slowly work your way up month by month.”