Happier Than I’ve Ever Been 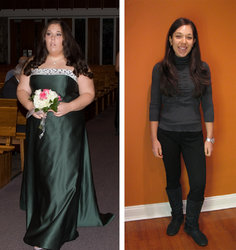 After an emotional layoff and a humiliating run as a bridesmaid in a grossly unflattering dress, Lexi realized that she’d hit rock bottom, and that something had to change, and fast.  She joined Calorie Count and started logging every single food she would consume and by counting one calorie at a time she’s successfully lost 122lbs.  Lexi was featured on the Today Show’s Joy Fit Club – Congratulations Lexi!

I think the most painful part of being overweight was the shame of it all. Every day was a new start to a new diet, only to end with failure, mostly a binge after all the diet deprivation, then a promise to start again tomorrow. I couldn’t take looking at myself anymore and the disgust I felt when I looked in the mirror. Disgust not only for the fat on the person I saw but also for what that person was doing behind closed doors. After an emotional layoff from my first job, my weight peaked at a whopping 253lbs. At that point I had given up on myself, thinking I wasn’t worth it. I pretty much barricaded myself in my house, only going out for the essentials, mainly food. I hid from social engagements, because I had nothing I could fit into, and because I was way too ashamed, too guilty, to let people see what I had become.

When my cousin asked me to be one of her bridesmaids, it sounded to me like a fate worse than death. Not only would I have to come out of seclusion, but I would have to showcase my weight gain in a gown and have it forever captured in pictures. After seeing those photos, I couldn’t take the guilt anymore. I tried something a little different. Instead of telling myself what I couldn’t eat, which only made me want it even more, I just gave myself a calorie limit. Once I reached that limit I was done for the day. Because I had been a quantity eater, I started to make healthier choices because those were the foods I could eat more of. I started to log everything I ate on CalorieCount.com. And thus, slowly but surely, a diet turned into a lifestyle change. At first it was hard with other people telling me to “cheat this once” or even making me feel like I was being rude if I didn’t partake in whatever food-related social event was going on, but eventually I realized that what I was doing was more important than instant gratification or pleasing others. I would have to stand hard if I wanted to succeed.

I’ve tried every diet under the sun, from the depriving cleanse diets to cutting out carbs, diary, everything. If I lost anything on these diets, it was quickly gained back after my will power gave up.

First I started by simply giving myself a calorie cutoff and logging what I ate on Calorie Count. With that alone I started losing weight within the first couple of weeks. Once I hit my first weight loss plateau, I incorporated the low-fat aspect to lowered calorie intake. To break through the next plateau, I added more fiber to my diet and less sodium. Little by little I was changing my diet for the better without even really realizing exactly what I was doing, I just wanted to keep on losing weight so I kept on incorporating different things. After a year and a half I have been able to lose over a 120lbs. I now eat a very low-fat, low-calorie diet, but the aspect that is most important I would say is that I stay away from any food that is processed. If it’s from God’s green earth, it’s for me. Shopping the perimeter of the grocery store is always a good idea, however, being careful with cheeses and processed meats.

RELATED:   Weight Loss Before and After: Leigh Anne Makes No Excuses And Loses 145 Pounds

Instant gratification is a tough thing to deal with, as temptation is all around, but knowing where you came from and the feelings it brought for you helps to get you through. Especially hard is the fact that most social engagements in today’s society revolve around food. The best advice I think I’ve heard is, “If you fail to plan, you plan to fail.” In other words you have to be ready for situations where you know eating will be a challenge. For example, if you know you’re going to a family function where there is going to be lots of temping food, strategize in advance what you are going to partake in (and in what amount) and what you are going to stay far away from. Or perhaps cook a healthy dish for everyone to enjoy where you know the ingredients going into the meal. If you are planning to go to a restaurant, look up the kinds of food they serve in advance and plan to make substitutions for things that aren’t healthy.

Most importantly know who you can count on for support (for me that was my family) and who you know will (most likely unintentionally) try and temp you or guilt you into eating poorly.

Instead of focusing on the tremendous weight I had to lose, I set my sights on smaller accomplishments. If you have an obsessive mind like mine, it helped me to reroute those obsessive thought and behavior patterns, and channel them into something conducive to your weight loss, such as an activity you enjoy or finding new healthy recipes to try.

Calorie Count not only made me accountable for what I was eating, but it helped in giving me boundaries. On previous diets, it was all about what I couldn’t eat, and of course, after a while, that’s all I wanted to eat. It would always end in failure and a binge. At first, with Calorie Count, it was simply staying within a certain amount of calories. That I could stick with because I could eat whatever I wanted, but once I reached that calorie max, I was done. After I a while, I was automatically choosing healthier foods, because those are the foods with the fewer calories, i.e., I could eat more of them. With the nutrient analysis, I could also see the nutrients I was lacking and those I was overindulging in. Now I can’t live a day without it.

I’ve been heavy all my life, so growing up, I was always heavier than kids my own age and it was something I was constantly aware of. There was even a point upon first entering middle school where I taped around my stomach with packing tape in order to hide my belly for a school dance. Teases and staring shied me further away from the social atmosphere a kid is supposed to thrive in. As I got older, I didn’t dare think that anyone could be interested in me let alone want a relationship with me. Who could possibly look beyond the fat when I myself couldn’t stand it?

Food was always a solution to everything for me. Happy, sad, bored, what have you, I ate. And the food addiction drove me to have binges that consisted of thousands of calories in a matter of minutes. Being from Hispanic origin, comfort and social engagements often revolved around food, but unfortunately I always took it to inconceivable levels. Of course the guilt would consume me afterwards, but guilt led me to eat more, and so the deadly cycle thrived.

I tried to eat similarly to whomever I was with so as not to bring attention to myself, but when I was alone was when I did most of the damage. When I would binge I would have huge portions of anything I could get my hands on, whether it would be junk food or even something more on the healthy side, I would eat huge quantities of it, and even though I knew what I was doing and I kept telling myself to just STOP, I couldn’t stop the frenzy. I was so out of control; I didn’t know how to stop. I saw my life escalating out of control and I felt I couldn’t take hold of my life anymore.

When I first started simply counting calories, I started seeing results within a couple of weeks. I hit plateaus, but slight changes and figuring out healthier choices that worked for me, I was able to break through them.

I realized I was a success, honestly, when Calorie Count contacted me about the being on the Today Show. That moment really hit me that, after 24 years of being overweight and the struggle to overcome my food addiction, I had done it.

Plan, plan, plan. Surprises are the easiest way for me to slip up. And if I am in a surprise situation where I can’t help a tempting environment I think about how I felt before I lost the weight.

I feel so much more alive! I don’t have to hide in my house anymore! I no longer have to feel like my life is passing me by, I can live it now!

Related Items100 Pounds Lost
← Previous Story Weight Loss Before and After: Dee Loses 104 Pounds And Transforms Her Body
Next Story → Bring Your Own To Go Box – the Eco-Friendly Leftover Box