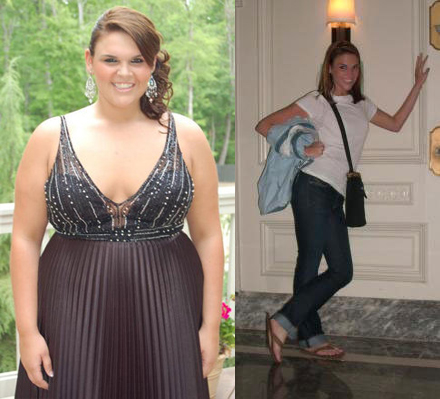 How long she’s kept it off: She started in August 2008 and reached her current weight in April 2009.

Personal life: “I live in Lawrenceville with my family — mom, dad and two sisters, but I go to school at the University of Alabama.” She is majoring in fashion merchandising.

Turning point: “When I left for college in August of 2008, I was so nervous that I was going to gain the freshman 15. So by eating better and walking around campus, I slowly started losing weight,” she says. “When I came home for Labor Day weekend, my parents told me they could tell I had lost a few pounds. I couldn’t believe it, so I immediately hit the gym and continued eating healthy.”

RELATED:   Happier Than I've Ever Been

Diet plan: “I didn’t have any special diet plan — I just watched what I ate, and ate smaller portions,” she says. “If I want ice cream, I’ll eat ice cream — I just don’t eat as much as I used to eat of it. I also counted calories just to make sure I was consuming enough food throughout the day. I discovered how amazing fruits, veggies, and seafood are too.”

Exercise routine: “I do cardio for an hour 5 to 6 days out of the week. I’m starting to do weights,” she says. She runs 5 miles almost daily and has started taking Pilates classes.

Biggest challenge: “Losing all the weight I have lost has been the biggest challenge,” she says. “Now I have to deal with a completely different person; it is life-changing.” She says some have responded negatively to her weight loss but she finds their negativity only makes her stronger and more appreciative of her supportive family and friends.

Related Items100 Pounds Lostrunningwalking
← Previous Story Tatyana decided to get in shape and get healthy. Learn how she lost over 60 lbs right here.
Next Story → My 90 Pound Weight Loss Journey with PCOS: From Struggle to Success