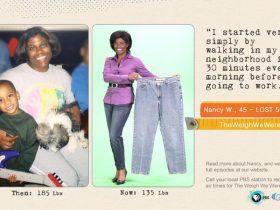 I Lost 50 Pounds: Nancy Loses Weight With The Help Of Her Sister

Today’s smartphones allow for increased opportunities for activities traditionally defined as sedentary behaviors, such as surfing the internet, emailing and playing video games. However, researchers Jacob Barkley and Andrew Lepp, faculty members in the College of Education, Health and Human Services at Kent State University, linked high cell phone use to poor fitness in college students.

Barkley and Lepp were interested in the relationship between smartphones and fitness levels because, unlike the television, phones are small and portable, therefore making it possible to use them while doing physical activity. But what the researchers found was that despite the phone’s mobility, high use contributed to a sedentary lifestyle for some subjects.

More than 300 college students from the Midwest were surveyed on their cell phone usage and activity level. Of those students, 49 had their fitness level and body composition tested. The researchers’ results showed that students who spent large amounts of time on their cell phones — as much as 14 hours per day — were less fit than those who averaged a little more than 90 minutes of cell phone use daily.

One subject said in the interview data: “Now that I have switched to the iPhone I would say it definitely decreases my physical activity because before I just had a Blackberry, so I didn’t have much stuff on it. But now, if I’m bored, I can just download whatever I want.”

The study is believed to the first to assess the relationship between cell phone use and fitness level among any population. Barkley and Lepp conclude that their findings suggest that cell phone use may be able to gauge a person’s risk for a multitude of health issues related to an inactive lifestyle.

The study appears online in the International Journal of Behavioral Nutrition and Physical Activity.