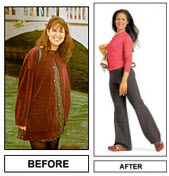 Marni Halasa had always been a figure skater. But it took a big change in her eating habits to really transform her body.

My idea of success: No longer thinking about my size first thing every morning

My unexpected gain: Finding a renewed enthusiasm for a sport I’ve always loved

I’ve been a serious eater my whole life. In my family, seven-course meals were the norm; second and third helpings were mandatory. “Don’t insult your auntie’s cooking. Have another falafel,” my mother would say. Even though I started figure skating competitively when I was 10, I still felt the effects of my overindulgence. By the time I finished high school, I weighed 146 pounds–30 more than when I started. Graduating from law school 8 years later, I was 157. I was tired and irritable. Nothing fit. Bright colors took a backseat to slimming black. I was desperate to disguise every bulge–especially in my skating outfits.

My Call to Action

At 27, I took a job inNew York Cityas a legal journalist and began teaching ice-skating on the side. On one of my first days at the rink, I overheard the other coaches raving about a nearby state-of-the-art gym. My urge to fit in got the better of me, and I popped in for a class. After struggling through the warm-up, I became fixated on several women, 20 years my senior, who were breezing through the routine. I was embarrassed for myself but inspired by them.

Learning How to Get Healthy

Soon, I was a regular at that gym, taking intense boot camp and sculpting classes.

At first, I huffed and puffed through most sessions, but the more often I went, the better I got and the more fun I had. After 6 months, I was going nearly every day; it became a big part of my social life. I felt tremendous energy and it showed on the ice: I nailed jumps with ease and could skate for an hour straight without getting winded. The crazy thing was, after a year of all this additional activity, I had lost only 8 pounds.

Frustrated, I asked the trainers at my gym for advice. Their unanimous reply: Change your diet. So I started following their lead, eating several small meals, which included plenty of lean protein and steamed vegetables, every day. I was able to stop stuffing myself because I knew my next minimeal wasn’t far away. Not cheating was hard (I definitely caved sometimes), but as my body changed, I started to lose interest in foods that would slow my progress.

It took a few years to reach my goal weight of 135 pounds. Determined to stay there, I didn’t waver from my commitment to a healthy lifestyle. Then 5 years later, I learned that the New York Rangers hockey team was looking for Rangers City Skaters–cheerleaders on ice. I knew that to make the squad, I’d need to step up my athleticism, so I hired a personal trainer.

Twice a week, I squatted, sprinted, cycled, and lunged–in addition to taking my regular classes. I completely cut out refined carbohydrates like white flour and sugar. After 4 months, I was a true athlete, with the strength and muscle definition to prove it. I shed 10 more pounds, lost several inches from my hips and thighs–and made the team! I was ecstatic that my hard work had paid off in such a big way.

At first, I found hard-core routines too difficult, so I’d ask the instructor to help me make the moves less demanding until my body got used to them.

Concentrating on today’s goal, such as completing 20 minutes on the treadmill, makes the journey toward achievement much less daunting.