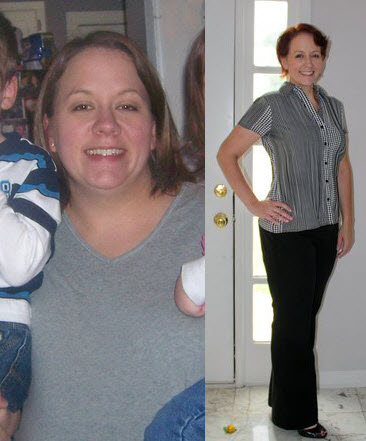 How long she’s kept it off: She started in March 2008. “I’d like to lose about 25 more pounds to reach my ultimate goal, but I’m also pretty happy where I am,” Bujak said.

Personal life: “I’m a divorced mom of three fantastic children, ages 2, 4 and 6, plus two dogs, a cat and four fish. I work as a data analyst at a large financial services company in Norcross.” She and her family live in Acworth.

Turning point: “I wanted to set a good example by being a healthy mom and making the right food choices so that [my children] learn those behaviors as well and, hopefully, don’t struggle with weight problems when they’re older,” she said. “In February of 2009, I met my biological brother for the first time. I was adopted at birth and he wasn’t. When we met, we became instantly close and I didn’t want to be the fat sister.”

Diet plan: “I don’t believe in fad diets and, since I’m a single mom, I don’t believe in paying for something that I think I should be able to do myself,” she said. She developed a set of rules to manage her weight. The rules included limiting desserts, cutting back on sodas and not eating after 7 p.m.

Exercise routine: “Right now, I’m focusing on toning more than anything else,” she said. “When you lose that much weight, there’s a lot of extra skin left over and it’s hard to get rid of. I’m doing a weight loss Pilates DVD five to six times a week right now.”

Biggest challenge: “For me, getting started was the hardest part,” she said. “Giving up foods I loved and putting in the time and energy to pack my lunch and make healthier meals was difficult at first, but once I started seeing the number on the scale get smaller it was easy to stay on track.”

How life has changed: “I’m much more confident in everything I do and I’m more outgoing,” she said. “I have much more energy and have lost a significant amount of back and knee pain.”