Men Before And After Weight Loss: Richard Shed 155 Pounds After Being Laid Off 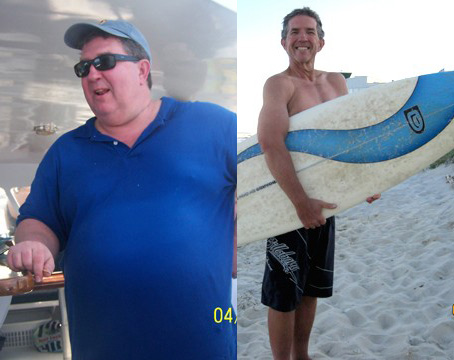 How I Gained It: My story is probably like everyone with a similar journey. I tried to go on a diet for a long time. Every Sunday in church I would pray to lose weight and start a diet, but by Tuesday, I was done with the diet. It went on for eight years.

I was always in good shape — although I was fat, I wasn’t lazy. I had it in my head that as long as I was active, I could eat whatever I wanted.

At my heaviest, I started to notice that my kids didn’t like me hanging around the ball field during their practices. Most likely they were ashamed of me. I decided that if the other dads or players did not like me for who I was, it was their problem. Boy, was I wrong. It was my problem.

Breaking Point: When I was at my heaviest weight, 335 pounds, I was laid off from my job. I was lucky. Why? I knew that I would not get another job if I looked like a fat, lazy person. I’m not lazy, but I knew no one would believe that unless they knew me. That was one of the biggest motivators for me.

How I Lost It: In September 2009, I was looking for a way to lose weight and came across

the Cabbage Soup Diet book that my sister gave to me two years earlier. After seven days, I lost about 10 pounds. After that, my sleep problems (likely sleep apnea) were gone. Then, my sister-in-law bought me some of Jillian Michaels’ books and that helped teach me about metabolism and eating the right foods — it was a life changer.

I stuck to 1,600 calories a day with only 20 percent carbs. I cut out processed foods, rice, bread, canned foods, junk food, fast food, sugary drinks and alcohol, plus I drank lots of water. I wrote down everything I ate and weighed myself once a week, which kept me in line. But it was difficult because my family did not change their eating habits, so there was always candy and chocolate around the house. I had to find it in me to avoid that stuff. I realize now that I ate mostly for comfort. Now, I don’t have the desire to because I know it will make me feel worse.

I’m not a runner so I started walking — about two hours a day, six days a week. I also purchased workout DVDs for rainy days. Nowadays, I use a bike trainer and do strength training as well.

One of the best things I started doing was having a veggie smoothie every day for lunch. I put in all the good stuff: a handful of spinach, broccoli, carrots, half green pepper, half of an onion,

RELATED:   "I Dropped 80 Pounds by Eating at Home"

garlic, celery, and a tomato. I get all my veggies for the day in one go. Ive done this for over a year and my skin, hair and overall health have benefited greatly.

There are so many benefits to losing weight. When I was overweight, my wedding ring was so tight that I had to get it cut off — I had never taken it off before. I recently got it repaired and I am wearing it again. I’ve gone off my blood pressure medicine. I also got rid of all my fat clothes and I’ve loved buy nice, new clothes that don’t come from the plus size stores. I feel great!

So many people have commented on my weight loss. The woman who cleans my house was looking into weight loss surgery, but since seeing me do it the hard way, she’s decided that she can do it too. That made my day.

It took Richard a little over a year to lose nearly 160 pounds, and he’s maintained it for six months now.