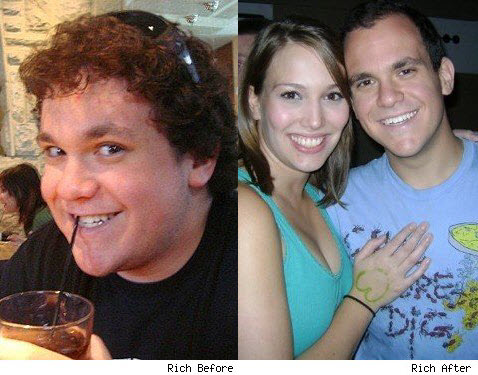 How I Gained It: I have never been what you would call a thin guy. Even when I was a kid, I was heavy for my age. There were a couple things that didn’t help out my situation, though: my high school’s proximity to a fast-food strip mall, and getting my driver’s license. There was a point in my last year of high school where I was eating a fast-food burger with fries and a drink (because you’ve gotta accessorize) upwards of four times a week.

It never occurred to me for a minute just what I was doing to myself, but by January 2007, I weighed in at the most I ever had in my life — 240 pounds. I was sent to a doctor, who told me I might have a condition called NASH, which is a kind of liver disease that manifests itself in people who don’t drink alcohol. I rarely drank at this point, so it was pretty safe to say any damage that was caused was due to fast food. I was put on a diet and exercise program; I can’t remember how long I stayed on it for, but the lowest I got down to was 215 pounds, which is still unhealthy. That next year, I moved into a university residence building where I spent two years studying and I regained about 10 pounds. By January 2009, I was 225 pounds.

Breaking Point: I had two breaking points. The first came in January 2009, when I tried to play ball hockey with my friends. I had always played goalie not because I was any good but because I was lazy, but at this game, I decided to try playing out. After I got absolutely wiped out after one shift, I decided I needed to do something.

What really pushed me over the edge, though, was when my grandfather passed later that month, and I took a flight fromEdmontontoToronto,Canada. The movie on the flight was Burn After Reading, a Cohen Brothers comedy. If you watch the movie critically, you will notice that in one way or another, every single main character is obsessed with their level of physical fitness. For some reason, something in me clicked, and I realized that it was time for me to do something about my life. There was something about watching George Clooney demand that his lover drop him off five miles from his house so he could run home that made my change my perspective.

How I Lost It: I didn’t know much about working out or eating healthy and I was too stubborn to ask for help, so I decided to stick with what I thought the fundamentals were: cardio exercise, and Subway sandwiches. Well, I got it half right — the cardio helped me get back into decent shape, but I was eating so much Subway at that point that it probably severely hindered my weight loss because of the carbohydrates from the bread. So, after hitting an elliptical a couple times a week from the beginning of January to the end of April, I didn’t lose much weight, but this changed when I finished school at the end of April.

I was going to work at a summer camp onPine Lake,Albertaon May 25, but I finished school at the end of April, so I figured there would be no point getting a part-time job for less than a month when I would be spending the rest of my summer at camp. So the month of May, I started hitting the gym hard, around four to five times a week. I didn’t do anything at all with weights — I just ran on the elliptical, and when that got boring, I ran outside. This helped me get in better shape, but I still wasn’t losing any weight. That was because of my attitude towards my health at this point. When a friend and I would go work out, later that night we would do an “un-workout,” usually by eating wings and drinking beer. While this was a hilarious concept at the time, only later did I realize how poor my attitude was.

When it came time to go to camp, I went in with a new attitude. I thought to myself, “Everyone loses weight at camp, even if they don’t try. I wonder what would happen if I actually tried this year?” The boss of camp had his head around fitness, and I asked him for advice to lose weight. He immediately suggested cutting out carbohydrates and sugars, and I did exactly that. While lunch used to be two sandwiches and three glasses of juice, I now ate an open faced sandwich with a salad and four glasses of water. I started eating breakfast instead of skipping it, and I just generally watched my portions. This, combined with walking everywhere (there are no cars at camp), plus playing ball hockey a couple times a week and not drinking alcohol led to my end result: Between May 25 and August 25, I had slimmed down from 225 pounds to 180 pounds. Make no mistake, there was nothing easy about it. Not eating sugar and bread sucks. Still, it was definitely worth it to be where I am today.