Weight Loss Before and After: Kristin Lost 15 Pounds And Got Healthy 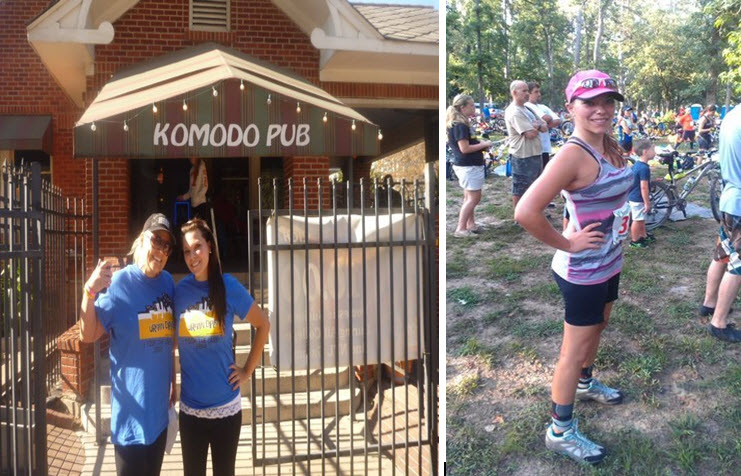 Throughout her childhood, Kristin Montoya was a chubby girl. She had been teased about her weight many times, but it wasn’t until high school that she decided to do something about it. However, her false habits of binging and purging through the use of Adderall did not make her the confident skinny girl that she had always yearned to be. It wasn’t until giving birth to her daughter that Kristin realized that the only way she would be happy – and to set the right examples for her child – would be to put forth the effort of exercise and healthy habits. This is her story:
All my life I have had a “pooch”, and prior to middle school, I had been a real chubby girl with a goofy bowl cut to match. One summer, my mom signed me up for camp at the local YMCA, I had been swimming alone and never heard them whistle for us to go inside – there were many other people there who were not in the camp. I finally noticed and got out, at which point the camp leader yelled at me for “disobeying them” and “on purposely not coming out of the pool”. The rest of the camp had been waiting by the door when I was led inside. Still in my one piece, I leaned against the wall opposite of the other kids in line while the camp leader again took role. A boy in line asked why I didn’t come inside, then started calling me fat and stupid – the other kids around just laughed along with him. I just looked down at my feet and ignored him but later on I went to the bathroom and shamelessly cried.

When I was a fresh and innocent 8 years old, I went to Splashtown – a local water park – with my family. My mom let me and a family friend go off on our own. We were at the top of one ride called the Toilet Bowl, waiting for our turn to go. There were two slides and two different “bowls”, so the lifeguard had to wait for the signal from the person at the bottom before sending another down. She would whistle and then wave us on. My friend was waiting at the mouth of the slide when she was waved on. I stepped up next and held on to the bar, waiting. There were two guys behind me. Looking back now, I’d say they were probably in their late teens or early twenties, but everyone looks a lot bigger when you’re so young. The lifeguard had been looking down for the signal when one of the guys started shoving my butt with his foot, trying to push me down the slide. I remember their horrible faces as they laughed at me. I held on tighter to the bar but after a good shove with his foot, finally my hands gave way. My legs came out from underneath of me and I think I hit my head on the slide when I landed. As I was swirling around and around in the dark (thank god they couldn’t see me) I started to cry. Because I was unprepared, I landed in the water on my back. I remember screaming underwater. When I came out of the water, my friend wanted to do it again, but I grabbed her hand and quickly pulled her away before those boys came down the slide and saw me painfully crying of embarrassment.

I lost some weight naturally in junior high (baby fat shifted elsewhere as I matured), but once I got to high school and had control over what I ate and when, I wanted to be skinny. And I wanted – no, NEEDED – to lose weight. And fast. So I started taking a friend’s ADHD pills to burn my fat. And I did. But no matter how skinny I was, I felt like I needed to lose *more* weight. I got skinny, really skinny, and I looked good, but my insecurities never went away. I was never really happy with how I looked and I never felt good enough.

In 2010, I got off the pills when I became pregnant and was relieved to not be starving myself daily. I could finally eat what I wanted and simply not care for once. It was very liberating. I gained 60 pounds, which is a lot compared to average pregnancy weight gain. However, after I had my beautiful baby, I felt disgusted again with how I looked. The tabloids showed new moms like Natalie Portman and Mariah Carey lose their baby weight in weeks, and they looked the same – if not better – than they had before. Not only was I fat, but my stomach hung like loose flab from my body because I had rapidly lost approximately 15 pounds after childbirth. I got back on my pills. Then I realized I was headed back into my vicious cycle. I wanted to feel good about myself, but it had to start from the inside. I knew that copping out and taking the easy path was not going to make me happy.

I stopped taking my pills and decided to learn some self-control and self-discipline. I got a gym membership, and through the motivation of friends and family, I turned my life around. I workout at least 5 times a week, plan my meals in advance and participate in 5Ks nearly once a month. Not only have I noticed a difference in my appearance, but my attitude as well. I’m more energized and willing to get up and go. I also feel great inspiring others to be the best they can be – the right way. Some days I slack off, but I always remind myself of this quotation, “You didn’t get skinny from eating one salad, you’re not going to get fat from eating one pizza.” With that being said, I’m not quite to my physical goal, but I am PROUD. And that is a feeling that I needed to discover and EARN before I could learn to be truly happy with myself, inside and out.