Home » From losing a few pounds to losing over 100 pounds 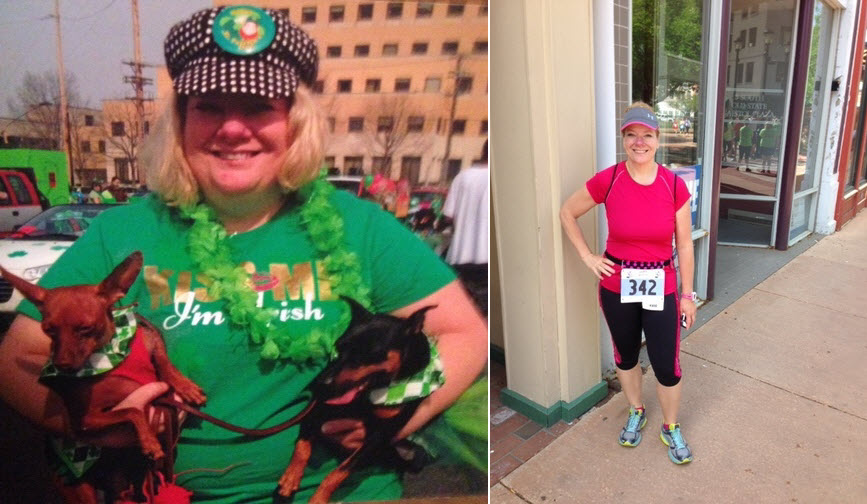 Back in March 2012, I was at a dog agility trial with three other friends. We traveled a lot together to compete in agility competitions. One of our friends mentioned she didn’t like the way she looked in the videos that we recorded for each other of completing a course with our dogs.

Another friend mentioned we should all compete to lose weight together. This friend, Jennifer, mentioned we could all use My Fitness Pal and be buddies on there. Since that day in March 2012, we have all been working toward a common goal to lose weight and also to become more healthy.

When I came home from the weekend and decided to download and start using the app My Fitness Pal, my goal was to lose a “few pounds”. I had tried other diets before and lost some weight but then I’d always end up gaining it back. So I didn’t want to be unrealistic thinking “I’ll lose 100 pounds.” I set out to lose 10-20 pounds initially and the weight came off pretty easily when I started tracking all my food intake with My Fitness Pal.

It gave me a calorie goal each day based on my height, weight, age and activity level. I quickly realized that I had probably been eating all my needed calories for a day by the end of lunch time each day. With that many calories from fast food and also the lack of exercise, I could now see why I had kept gaining weight.

Through the course of two years, I started to learn that our bodies have a specified amount of calories we need to maintain. In general, when we exceed those calories day after day, we are going to gain weight.

I was very far from being fit in March 2012. I actually was dealing with being anemic and the last thing I desired to do was to expend energy exercising when I was so tired all the time and just wanted to lay my head down to sleep at any given time.

But the first week of using My Fitness Pal, I gave myself a goal of 3 lunch hour walks of 30 minutes that week. I kept this slower pace of exercise up and gradually added things like biking and doing the elliptical to my routine.

In April 2012, I also received intraveneous treatments for my anemia and I had a very quickly rebound of feeling much more energetic. After 3 weeks of IV treatments which brought my iron levels up to a normal range, I was feeling incredible.

Truly since that time, there’s been no stopping me from being active. I now absolutely love exercise and am pretty much addicted to it. In February 2013, I started running for the first time. In April 2013, I completed my first mini triathlon and also my first 5K run. In August of the same year, I completed a 10K. And as if that’s not crazy enough, I ran my first half marathon in October 2013.

I have found a love for being physical and also learned to love my healthier choices of food.

My same friends have continued this journey with me as well. In February 2013, our dog club featured a story on the 4 of us and collectively we had lost over 220 pounds since March 2012. In February 2014, our dog featured a follow up story and our grand total of weight loss was over 300 pounds!!!

It’s been amazing having these friends to be so supportive. We’ve all had our ups and downs with our foods, exercise and even life in general and we’ve been there for each other.

We pack our lunches for agility trials so we can control the food options rather than the normal potlucks that occur. We’ve even had other people notice our weight loss and ask how we’ve done it, which has allowed us to share and also support new people along the way that want to join the journey of becoming more healthy.

My husband is my biggest supporter in this journey. He has always been an avid runner for the last 20 years since we’ve known each other. In April 2013, I was able to actually start running with him and now we run together several times a week. We’ve ran in 5Ks, 10Ks and did our first half marathon for both of us together.

He also understands my food needs. He is patient when I’m stalling at a restaurant because I need to look up and plan my calories before eating. Also he understands there are some days that I’m being very strict on myself with my food choices and other days when I may splurge on pizza or a sundae.

He also has been a great supporter in taking lots of photos of me along this journey and then sharing them randomly with me via our cell phones. Sometimes I’m in shock when I see these older photos and I’m so glad he has taken these photos and shares them with me.

My social outings have also changed. I spend a lot of time with my friends doing activities like going for a run, biking, zumba, resistance training classes, etc. rather than going out to restaurants to meet up and eat.

I feel the best I’ve ever felt in my life and it’s because of learning to love myself and love this journey of health. My health is better overall now compared to how my health was before I started this journey in March 2012. My blood pressure went from being hypertensive to now being so low that it always make doctors worry a little. My primary doctor has ran tests and has told me to let other doctors know I have an “athletic heart” which answers their questions about a low resting heart rate (due to the long duration from long distance running). My iron levels are wonderful and I have not had any other issues with anemia since April 2012. My family has genetic heart issues and keeping my cholesterol levels and blood pressure in the normal ranges is very beneficial.

In May 2012, my oldest brother passed away from a sudden heart attack. After doing a lot of research about his specific heart condition, it reaffirmed that I need physical activity and a better diet of foods in my life. The first summer when I was out walking in the heat on my lunch hours, I just kept thinking “keep that heart working hard and pumping the blood.” There are days when I’m pushing through a hard run or exercise routine and I feel my brother inside me encouraging me to keep working my heart hard.

When I started this “weight loss” idea with my friends at the beginning I only set out to lose a few pounds. Had I known I would now be at 118 pounds of weight loss and completely happy at my current weight (going from 273 pounds to 155), I would have been overwhelmed. I would have never imagined I could lose 118 pounds. My secret – tracking calories, moving more,never giving up and encouraging others.

You might also enjoy:  “Sticking with smaller goals keeps weight loss on track“