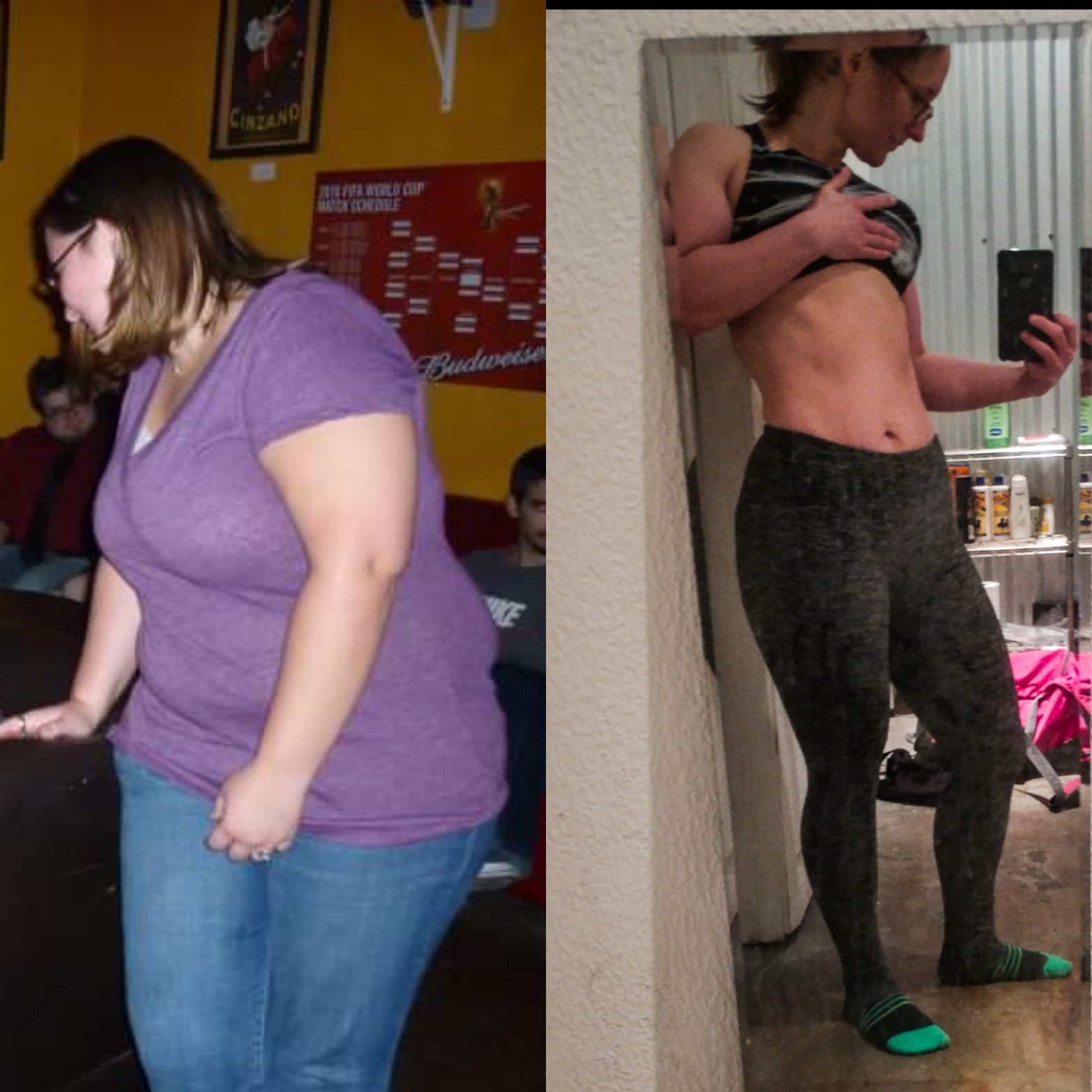 I grew up in a family that struggled financially so me and my brother often did not know when our next meal would be. Often times, I would over eat while I was at school since I never knew if dinner would be available once I got home. Many of my closest friends knew my situation and their families were generous enough to often pick me up and take me out to dinner with them. Before I knew it, as a young teenager, I had put on an enormous amount of weight and I wasn’t really sure why, or how to change it. I began to believe that I was just meant to be a bigger person and there was not much I could do about it.

HOW DID YOUR WEIGHT AFFECT ANY ASPECT(S) OF YOUR LIFE?  Being overweight left me very self-conscious. I spent countless summers in the heat of Texas wearing jackets and jeans because I was too uncomfortable to wear shorts or show my arms. I avoided swimming or beach trips with my friends and usually spent my days inside which lead to more eating and lack of exercise.

WHAT WAS THE “TURNING POINT” THAT GOT YOU STARTED ON YOUR WEIGHT LOSS JOURNEY?  In December of 2011, the day I graduated college, my father passed away from full cardiac arrest at the age of 55. I was 24 years old at the time, just starting my “real” adult life and my father did not get to see me walk across the stage that day. At that moment I knew that if I did not make a change in my life that I could end up in the same position. I could end up having my life almost halfway over and miss out on so many important things my future had to offer.

HOW DID YOU GET STARTED?  When I started my journey, I jumped in with both feet and joined a Crossfit gym that was close to my job. I knew it would be hard, and I honestly didn’t think I would last, but I wanted a dramatic change and I definitely got one.

HOW LONG AFTER YOU STARTED DID YOU BEGIN TO SEE RESULTS OF YOUR WEIGHT LOSS EFFORTS?  I spent a year at the crossfit gym I was going to without seeing many results, and honestly continuing to not take it seriously myself. My original coach who inspired me to keep going had left and the dynamic was not the same for me, but I kept going regardless. After that first year, I found that coach had opened his own gym so I joined there and almost immediately started seeing results. Within the first 8 months I was with him, I lost 45lbs.

WHAT WAS THE HARDEST PART?  I had to completely change my entire life around. I was developing medical issues due to being overweight, such as GERD which I already had a daily prescription for at my young age. I had support from my family and friends, but since their habits did not change, I ended up spending less time with them since most of our social meetings revolved around eating.

DID YOU EVER WANT TO GIVE UP? WHAT KEPT YOU GOING?  In the beginning, there was several times I wanted to give up, but knowing I did not want to end up following my father’s footsteps to the grave and not wanting to accept that I was just meant to be bigger kept me going. I looked to pages like this and was inspired by other people who were able to make a change and hoped that if I stuck with it I could one day see the person I wanted to in the mirror. My trainer was also a big influence in keeping me motivated. Knowing he was there waiting for me each day and that he believed in me made me not want to disappoint him or let either of us down kept me going.

DID YOU HIT ANY WEIGHT LOSS PLATEAUS? HOW DID YOU OVERCOME THEM?  Over time, I have hit several weight loss plateaus. Thankfully I have an amazing knowledgeable trainer who constantly works with me to overcome these. We often change the workout program I am on, or switch up my diet in order to kick start my body back to responding.

HOW LONG DID IT TAKE YOU TO LOSE MOST OF THE WEIGHT?  It took me around 2 years to lose most of the weight. After beginning my weight loss journey and losing 45lbs, I was blessed with my first child and ended up gaining all and then some of the weight back. I had to start over from day one after having my son, but I had already developed a love for fitness by that point, and knew that I had done it once and would be able to do it again. Two years later, I’ve now lost 80lbs since having my son.

DID YOU HAVE ANY NON-SCALE VICTORIES?  I love non-scale victories so I always notice them. My favorites are being able to walk into a store and not having a panic attack while trying to buy clothes. This has always been a struggle for me and things used to “never fit quite right” but now I can walk into almost any store and be happy and confident in almost anything. I also love that I know I can keep up and play with my toddler son and not just watch him play from afar.

WHAT DOES YOUR DAILY DIET LOOK LIKE COMPARED TO WHEN YOU WERE HEAVIER?  I have always been an emotional stress eater, even to this day I still struggle with it. When I was heavier, I never thought to care about what I ate. I ate out often, in restaurants and fast food, and I almost never cooked anything.

HOW DOES YOUR PHYSICAL ACTIVITY COMPARE TO WHEN YOU WERE HEAVIER?  When I was heavier, I honestly did little to no physical activity. After I started Crossfit, I didn’t immediately enjoy it. I signed up for 2 times a week, and had to convince myself each night to show up because I had already paid for it and didn’t want to waste my money. Now, I wake up at 4:30am 4-5 times a week excited to get to the gym and get my workout in. I do a combination of strength and conditioning training at a local gym, Freestyle Conditioning, with a combination of group classes and personal training.