Real Weight Loss Success Stories: I Lost 80 Pounds And Went From Back Row To Black Belt 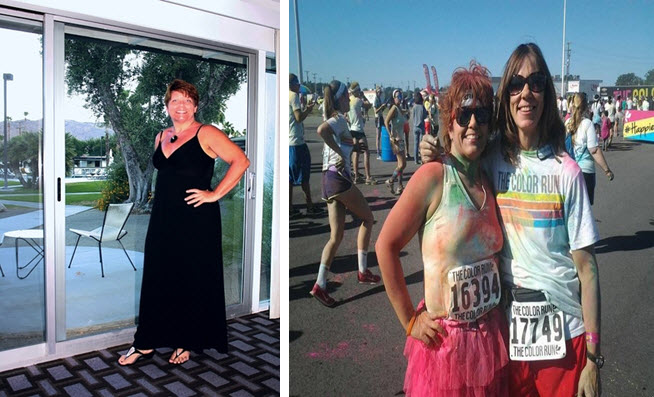 I grew up overweight; of the five children in my family I was “the fat one”. My mother repeatedly begged me to lose weight, but as a child I did not have any control over what was served. As my parents were both from the deep South, every meal included multiple dishes, and all the vegetables were fried or boiled with pork fat. Teased and isolated, I became a loner, and turned to food for comfort as soon as I got home from school. My after-school routine was eating a half box of cereal in front of the TV, watching cartoons until dinner was served.
I met my future husband on the bus in high school, and we were married seven years later. When we found out we were going to have a baby, we bought a house in the country. The neighborhood was remote, and again I was isolated. Food became my friend and my hobby. I went back to work and began eating huge carry-out lunches every day. I ended up at 246 pounds and a size 22, and stayed in this range until I was 45 years old. I was lucky in that I remained relatively healthy, never sharing in my parents’ high blood pressure problems, but I imagine they were lurking in my future. Perhaps, if that had happened, I would have realized sooner how bad things really were.

I tried to go on short bike rides and hikes with my son’s Boy Scout troop, but more than once I gave up halfway through and had to call someone to come and get me. I gave up on all the things I would have liked to do in life, being fearful of failure and embarrassment, and hating myself for being so weak that I couldn’t control who I was. I dreamed of being a person who hiked and ran and did martial arts but believed I couldn’t because I was so big and could never change. I was on the back row, watching my life go by without me.

The next day, I joined the YMCA and started taking beginner group fitness classes. The first few were excruciating — I didn’t think I would make it through the hour. I would run to the bathroom in the middle of class just because I was afraid that if I didn’t take a break I would be carried out on a stretcher. However, somewhere inside I found the resolve to keep going. I also began a very simple eating plan that was part of a Bible study, and the structure as well as the self-examination that was associated with it made me understand where my bad eating habits had come from, and that I could change them. It was six weeks before the first pound came off, and the only thing that kept me going was reminding myself that I was doing everything right, and that I couldn’t possibly be the only human that this wouldn’t work for. The first time I looked down at the scale and it showed 2 pounds lost, I fully expected it to be back on the next day. However, when it finally began, the weight loss proceeded rapidly. Within eight months I was down 50 pounds, and had switched to the most difficult classes I could find at the Y, while also continuing my karate training.

At this point, even though I was still at 190 pounds, I had the self-confidence to approach the group fitness teacher and ask what I would need to do to become an instructor. She was so kind, supportive, and motivational — all she saw was the drive, not the weight, and I signed up for my first group fitness certification. Not long after that, I heard about Les Mills BodyCombat at another facility in town. Not knowing anything about how gyms work, I walked up to the front desk, introduced myself, and told the attendant that I wanted to be a BodyCombat instructor and asked who I would need to talk to. He set me up with the department manager, who agreed to sponsor me in my training even though I was not a member and had never even taken the class. Two weeks later, I was in a 3-day training that changed my life. I suppose it would be equivalent to running a marathon in its impact. I went back to my hotel room every night and cried, not because of what I was doing, but because of the years I had wasted in being too afraid to try. That training showed me how far I had come, and where it was possible for me to go. From that day forward, I lived with the idea that it was OK to be afraid, but not to let the fear keep me from participating in my own life. I went on 180 mile bike rides and 11 day backpacking trips, and even though they were tough, I had become tougher, stronger than the voices in my head that said “no”. For the first time in my life, I was living!

The rest is just a continuation of that journey. At 52 years old, I am now certified in, and am actively teaching, 7 Les Mills formats, have earned my black belt in Isshinryu karate, and have lost an additional 30 pounds. My latest challenge is earning my personal training certification. I am so fortunate in that my journey has given me a real understanding for those that find themselves where I was. I get to stand on a stage almost every day, leading people in exercise classes, giving them hope and encouragement, and helping them to step over the line of fear to see the great and amazing things that are on the other side!