Found New Energy at the Gym 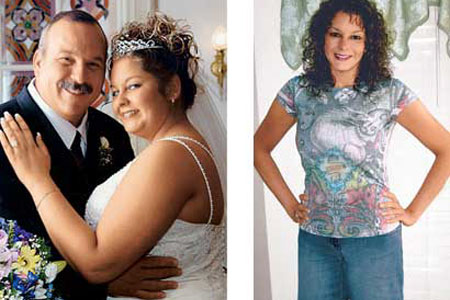 The Gain: Soon after she became pregnant with her first child, Wood gave herself a free pass to eat whatever she craved. “I ate huge portions of everything, especially sweets,” she says. “My doctor advised me not to gain more than 30 pounds, but I gained 80!” Wood planned to drop the weight after son Dylan arrived, but the rigors of momhood derailed her. Four years later she had a second son, Jake. By the time he turned 5, Wood had hit 217 pounds.

RELATED:   Weight Loss Before and After: Christina Lost 148 Pounds And Half Her Size

The Change: Wood ran into an old coworker who looked great after slimming down with Weight Watchers and was inspired to try the program herself. After the first meeting, she set an easy goal: Lose 1 to 3 pounds while seeing how the plan fit into her life. “After a week, I had lost 6 pounds,” she says.

The Life: Rather than eating on the fly, Wood started to plan her daily meals. Breakfast was fruit and yogurt or oatmeal, lunch was usually lean protein and a salad, and dinner was often a low-fat recipe her husband, Eric, found on the Internet and prepared. Wood joined a gym and started doing cardio and weight-training circuits for 30 minutes five times a week. She also began taking Spinning classes and playing baseball with her children.

The Reward: “I have the energy to keep up with my kids; sometimes they’re worn out before I am!

Eat healthy on the go. “As a busy mom, I don’t always have time to cook. On those days I rely on grilled chicken sandwiches or salads from the drive-thru.”

Stay accountable. “Knowing I would be weighed in each week at the meeting made me think twice when I wanted a high-fat treat.”

Go shopping! “Nothing is more thrilling than fitting into smaller clothes.”