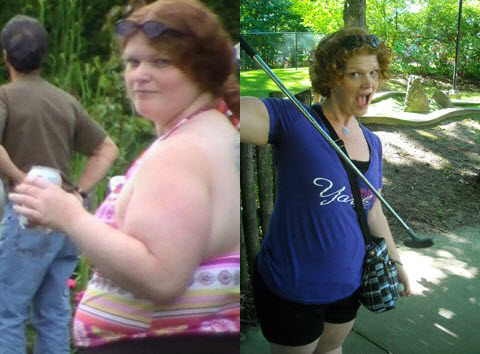 How I Gained It: Many of my family members are overweight, so gaining it was a combination of learned habits and emotional eating. I never learned what proper portions were, and I never learned when to stop eating.

The biggest contributor to my weight gain was not learning to deal with my emotions properly. I was teased in third grade for being a bit overweight, and it was then that I had a choice to make: I could either tell someone about it to help me deal with how upset it made me, or I could choose to not say anything. I chose the latter; I was too embarrassed to tell someone, and so I dealt with it by eating. This started a 20-year long abusive relationship with food. By the time I was 13 years old, I weighed 180 pounds, and by the time I was 26, I topped the scale at 250 pounds. I ate for every reason under the sun, whether I was hungry, bored, upset, happy or eating without even realizing it. Eating became a habit, much like smoking cigarettes. The problem was that I had no idea that this weight gain was of my own making — I blamed everyone and everything else.

Breaking Point: When I was 26 years old, I moved into my own apartment and for the first time, I was on my own. I had never lived on my own before, and I was freshly out of a relationship. During this downtime, I inevitably ended up thinking about myself and my future — that’s when I noticed the physical ailments, loneliness and overall lack of a zest for life. My weight had become such a defining characteristic for me that I never thought I could amount to anything.

I was determined to find a solution, so I started listening to self-help podcasts and reading books. That’s when I learned what self-responsibility truly was, and when I realized for the first time in my life that my weight was not due to someone or something else. I created my own situation, my low self-confidence, my weight and my own loneliness.

This realization absolutely devastated me, but out of the darkness came a light, and out of this sadness came the power to change my life. I finally understood that if I could create misery in myself, I could always create joy just as powerful. That was the day my entire life changed.

How I Lost It: For me, losing weight has been an extremely gradual change. At the beginning I didn’t set out to lose weight — I set out to become happier, but when I asked myself what made me sad, one of the main issues was my weight. This time, instead of being overwhelmed by the weight I had to lose, I was much more rational. I decided that I didn’t want a miracle solution, I just wanted to take control of my body, so I started small. I began by dealing with my emotional eating. I decided that every time I caught myself at the fridge, I would ask myself why I was there. If it was for any other reason than hunger, I would instead sit down and write in my journal. I also got rid of all the snacks in my house so I was forced to eat something healthier instead. These two changes helped me to lose 12 pounds in my first month.

I learned that it takes 28 days to learn a new habit, so I decided to work on one or two habits at a time. My first was making sure each meal contained a healthy proportion of vegetables, carbs and protein. Around the same time, I also started to walk more often. Not much to begin — just 15 minutes or so a few days a week.

RELATED:   Real Weight Loss Success Stories: I Lost 20 Pounds And Got My Health Back

A friend of mine was a runner, and I was intrigued by the thought of running, even though I was the furthest thing from an athlete. I started to think, if she could do it, why couldn’t I? About a year later I moved into anew cityto try and had a fresh start at 50 pounds lighter, so I decided to register for a 5k race to give it a try. I started with a walk-to-run program, and on October 5, 2008, I ran my first 5k with my two best friends waiting for me at the finish line.

That’s when my life really changed. I decided that if I could run 5k, perhaps I could run more. Since then, I’ve run four more 5ks, an 8k, two 10ks, a 15k and, finally this past September, my first half marathon. Running gave me a goal to shoot for, and it taught me to respect my body and feed it properly. It helped me to lose a further 40 pounds and increased my self-confidence and worth. I now seek out opportunities instead of hiding from my life. I am constantly expanding and seeing what I’m capable of.

I still have about 30 to 40 pounds to lose before I get to my goal weight, but for the first time, I am confident that I will get there. I have created joy in my life, regardless of how much I weigh. I have also created confidence, love, a zest for life and hope. My life is an open canvas, and I plan to paint it with very bright colors.