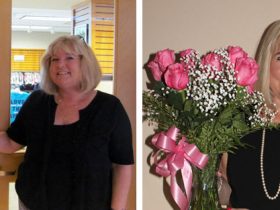 Weight Loss Before and After: I Lost 42 Pounds To Fight Diabetes

Growing up in a family that valued exercise and healthy food, Katherine never worried about her weight. “I played so much soccer, I could eat anything,” she says. But due to a foot injury that acted up in college, she quit sports and put on 30 pounds in two years.

Even though she reached 150 pounds, Katherine didn’t dwell on her increasing size. “Many of my friends had gained weight in college too, so I didn’t feel like I needed to change,” she says. “When I saw photos where I looked heavy, I would simply tell myself it was a bad picture.” But at Christmas dinner with her family, she had a wake-up call. “As usual, I was loading up on desserts, and my aunt said, ‘You don’t have to have everything. You can pick just one.’ For the first time, I started to look at my habits—and body—in a new light.”

Determined to slim down, Katherine saw she’d been using her foot as an excuse. She scheduled surgery but didn’t want to wait to get active again. Though she couldn’t run and play soccer, she started swimming and riding a recumbent bike at the gym regularly. She also re-examined her diet. “I realized I was eating heavier foods than I did at home; midnight quesadillas and wine had become mainstays,” she says. She started cutting out extra drinks and after-hours grazing—and began losing 2 pounds a month. After surgery and graduation, Katherine moved into her own place and took up cooking. “I centered all my meals around fruits, vegetables, and grains,” she says. “To control my portions, I made just enough for me and my boyfriend.” In nine months, Katherine was down to 130.

In it for the long haul

“As I lost weight, I noticed I was more energetic every day,” she says. “So I was inspired to keep eating well and add even more exercise to my life.” Once her foot healed, Katherine tried running again on the trails near her house. “At first I could only do a little bit at a time, but eventually I got up to six miles,” she says. “I didn’t go very fast, but I loved every minute of it!” Four months later, Katherine was down to 120 pounds. “The best part is, I never went on a diet or started an extreme exercise regimen,” she says. “I just chose to make my everyday life healthier—and that’s something I can keep up forever.”

* Be a morning person “I’ve found that a workout is the best reason to get out of bed. I often start exercising at 6 a.m. When I commit to my health that early, I keep making good-for-me choices the whole day.”

* Do your prep work “I fix the next day’s food as I’m making dinner. I’m more likely to pack a nutritious lunch when I have the cutting board and vegetables out already.”

* Move it! “I exercise as much as possible so I can eat more. I go to the gym, but I also walk everywhere I can. Never feeling deprived helps me stay on track!”