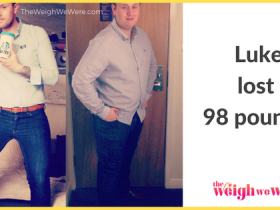 How I Lost 98 Pounds: Luke Drops Weight And Discovers A New Life

I’ve been overweight for as long as I can remember. There was never a time in my childhood that I wasn’t considered the “chubby kid”. Of course I was still cute, but regardless, I was an overweight child and it continued throughout life.

WHAT WAS THE “TURNING POINT” THAT GOT YOU STARTED ON YOUR WEIGHT LOSS JOURNEY?  After years of avoiding the scale like the plague, I finally decided to step on the scale in December of 2010, and saw that my weight was at an all time high. I was barely fitting into size 26 pants, and knew that something needed to be done. I took small steps and in 2 years lost approximately 40 lbs. In January of 2012, I hired a personal trainer and had my BMI tested, and when that number was so close to 50%, I knew it was time. I was 24, about to be 25, and I knew that if I didn’t do something now I never would.

HOW DID YOU GET STARTED?  At first I was just limiting the amount of fast food I would eat. Instead of eating a whole pizza, I’d eat half. Instead of eating a double cheeseburger, I’d get a single. Or I’d order a salad, with a side of fries. For exercise I would go to the gym with my sister a few times a week, and I’d primarily do about 30 minutes of cardio, followed by various weight machines. Then when I hired my trainer, she would give me a workout to do once a week, and I would repeat that workout 3-4 times and on the other days would do strictly cardio. I started calorie counting, and invested in the Body Media Armband to help keep me accountable.

HOW LONG AFTER YOU STARTED DID YOU BEGIN TO SEE RESULTS OF YOUR WEIGHT LOSS EFFORTS?  Within the first month or two I had lost 20 pounds, and although I could feel that my clothes were bigger, I was still having a hard time seeing any change in my body. It wasn’t til about 4 months in that I saw a picture of myself from before and then realized how different I looked just from 4 months prior. My face was smaller, my stomach was flatter, it was amazing to me and motivated me to keep going.

WHAT WAS THE HARDEST PART?  The hardest part, and still is, is food. I have a food addiction. Food has been my best friend for many years and has filled voids when needed. The hardest part is trying to find within myself what exactly it is I’m trying to fill, while still enjoying life and having a piece of pizza every once in a while. Balance has been the hardest part, but I’m getting better at it every day 🙂

DID YOU EVER WANT TO GIVE UP? WHAT KEPT YOU GOING?  There have been a few instances that it’s become “too much”. The worrying about what I’m eating, the feeling of not being “where I want to be yet”. Weight loss is obviously physical but more mental than anything else. What has kept me going, is that I haven’t given up yet despite those tough times. What keeps me going is knowing that I’ve already accomplished so much, and I know one day I will get to where I want to be. My motivation is my future.

DID YOU HIT ANY WEIGHT LOSS PLATEAUS? HOW DID YOU OVERCOME THEM?  I’ve been in a plateau for a year. A YEAR. It’s immensely frustrating, but I have to take pride in the fact that I haven’t gained the weight back, and that I refuse to give up. I refuse to be the girl I once was, because if I ever do that means that old girl won.

HOW LONG DID IT TAKE YOU TO LOSE MOST OF THE WEIGHT?  It took me a year to lose the majority of the weight, about 80 lbs.

DID YOU HAVE ANY NON-SCALE VICTORIES?  Oh goodness, SO MANY. I still have them today! Being able to cross my legs, being able to sit “Indian Style”, going from a size 26 jeans to a size 14! Facing fears to do things I would have never done when I was bigger, like going on a jet ski, or running a 5k. Those are the best kinds of victories.

WHAT DOES YOUR DAILY DIET LOOK LIKE COMPARED TO WHEN YOU WERE HEAVIER? Compared to what it once was I’ve done a complete 360. When I was heavier, I would go all day without eating. Then, I’d have dinner, then a couple hours later would eat more, then another couple hours later I’d maybe go out with friends and get something to eat, then would end the night at either McDonald’s for 2 McChickens with cheese or make two peanut butter and banana sandwiches with a glass of milk when I got home. When I started my journey, I was the queen of Lean Cuisine’s and 100 calorie packs. I was more focused on the calorie count rather than what I was actually putting in my body. Now, I try to eat as “clean” as possible. The less processed the better.

HOW DOES YOUR PHYSICAL ACTIVITY COMPARE TO WHEN YOU WERE HEAVIER?  I wasn’t active at all when I was bigger. When I was out with friends, I was always tailing behind them because I couldn’t keep up. I was a nanny and couldn’t keep up with playing with the kids on the playground. Now, I run. I’ve completed two 5k’s, and hope to do more soon. I workout at least 5-6 times a week and I make it a priority because it just makes me feel good to be active. 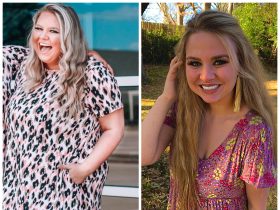 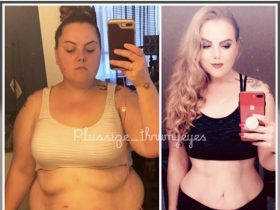 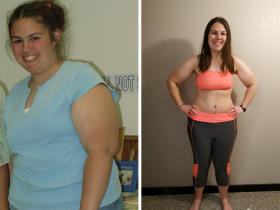 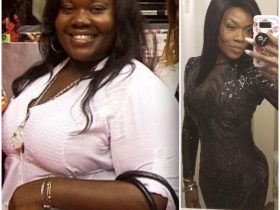