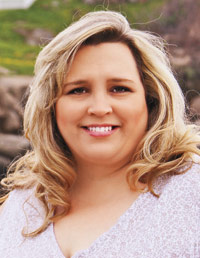 I was sitting against the plush black leather of the limousine as it carried me away from the grave of my 2-year-old son, Joshua, who had been killed days earlier after being struck by a pickup truck. Yet all I could think about was food. With bitter tears running down my cheeks, I closed my eyes and pictured the platters of roast beef, creamy mashed potatoes and assorted pastries that my friends had lovingly set out at the wake. I imagined piling my plate with as much food as possible and swallowing all of it, pushing the pain down as far as it would go. The more I thought about food, the less I thought about seeing those precious brown eyes of Joshua’s closed forever.

Some people cope with the loss of a child by turning to alcohol or drugs. My drug of choice was food. When Joshua died, I was 40 or 50 pounds overweight. In the 20 years since, I have “comforted” myself to nearly 400 pounds.

Believe me, I’ve tried to lose the weight. I’ve been on countless diets, at times subsisting on little but grapefruit or cabbage. I’ve tried pills and liquid diets. I’ve taken laxatives and have tried starving and purging. Every time I lost and regained I felt like more of a failure.

My struggle with weight has been compounded by a society that sees the obese as something akin to lepers. We’re viewed as hideous, stupid, ignorant, loathsome and worst of all, worthless. There are laws that prevent discriminating against minorities and the disabled; there are no advocates for the obese. I’ve been passed over for jobs due to my weight, and my insurance company specifically excludes any treatment for obesity.

Of course, all the discrimination takes a toll. I’ve spent the last three years mostly indoors, hiding from the world, and at times my self-esteem has been nonexistent. At one point, I became so depressed that I contemplated committing suicide.

The day I realized that I wanted to live and discard the shroud that I had used as protection against the pain of losing my son came a few months ago, when I broke a toilet seat because I was so obese. For the first time in years I looked at myself in the mirror and saw a person—not just a huge mound of flesh, but a real woman who was so guilt-ridden about not being able to save her son that she didn’t think she was worthy of making the changes necessary to save herself.

So I’m finally committed to doing what it takes to start losing the weight. The moment that toilet seat cracked was when my hard shell of self-loathing cracked as well.