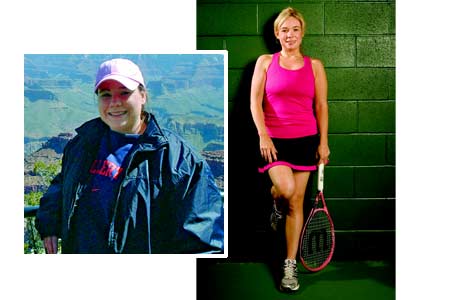 A panic attack motivated this mom to start cardio exercising for her kids and for herself.

Lesson Learned “You need to want it. No matter how much others support you, it won’t make a difference if you aren’t self-motivated.”

Secret Weapon “My very energetic golden retriever, Bogey. Now he has to keep up with me!”

Being overweight was a way of life for Erica. “I never wore a single-digit size, even in middle school,” she says. By the time she got pregnant with her first child, Erica weighed 200 pounds. Three years and two babies later, she hit 212. “I had lost all control,” she says.

Erica began worrying that she wouldn’t survive to see her kids (now 5 and 2) grow up, and in June 2007 she had a panic attack. From that day on, “I vowed to make better decisions about food,” she says.

RELATED:   Male Before And After Weight Loss: Brian Cuts Back On Calories And Sheds 111 Pounds

Erica’s first goal was to spend 30 minutes a day on the treadmill, walking slowly and then working up to a run. “Exercise was a big key for me,” she says. “When deciding what to eat, I’d remember how hard I’d worked to burn those calories, and I didn’t want to waste it on junk.”

As her cardio became easier, Erica added strength training two or three times a week and looked for other ways to challenge herself. She took spin classes and played tennis with her husband. “I started to respect my body,” she says. She also started making breakfast her biggest meal of the day, and stopped eating carbs after 3 p. m., putting an end to late-night snacking. Never big on cooking, Erica knew she couldn’t eliminate her takeout habit entirely, so she researched menus online to find healthier choices.

Her hard work paid off: By January 2008, she was down to a size 6. In August 2008 she joined a running club and started training for a marathon. “Conquering my weight was such a big thing,” she says. “Now I feel I can do anything.”

Toss the fat pants “I threw out my old clothes so I wouldn’t have anything to wear if I regained the weight.”

Chew away cravings “I keep sugarless gum on hand to curb my post-meal sweet tooth.”

Do what you love “I could play tennis with my husband for hours. It’s so much fun that I forget I’m working out.”

Related Items80 Pounds LostOver 80 Pounds LostrunningSEOtreadmillwalking
← Previous Story Weight Loss Before and After: I Lost 50 Pounds And Got My Energy Back
Next Story → Finding My Passion – From a sad, broken girl to a Nutrition Consultant and CrossFittter!