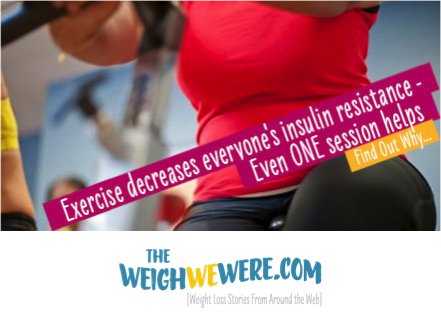 Conclusions:
According to Andrea Cornford, a member of the research team, “Exercise decreases everyone’s insulin resistance and therefore reduces the chances of developing diseases such as type 2 diabetes. This study shows that even a single bout of exercise helps obese individuals increase their body’s fat-burning rate and improve their metabolic health.”

Discussion:
One out of every three Americans is obese. These individuals are at greater risk for additional diseases, since obesity leads to other health problems, such as diabetes.

Obesity-related complications are associated with an abnormal fat metabolism in the muscle. As a result, accumulated fat by-products inside the muscle affect insulin resistance. To avoid the build up of fat by-products, fat must either be oxidized (burned, as in exercise) or stored (as benign fat) in muscle.

A team of researchers has examined the effect of exercise on fat accumulation in a new study involving five obese women. In one session the women overate and did not exercise; in a follow-on session they overate and did exercise.

The researchers found that:

>> the body’s fat-burning oxidation rate was reduced after one day of overeating;

>> conversely, just one session of exercise increased the rate of fat-burning oxidation; and

>> exercise increased the amount of fat that would eventually be stored in the muscle.

The study was conducted by Andrea Cornford, Minghua Li, Simon Schenk, Matthew Harber and Jeffrey Horowitz, Division of Kinesiology, University of Michigan, Ann Arbor. Their research is entitled “Alteration in Lipid Metabolism After One Day of Overeating Are Reversed by a Single Session of Exercise.” They will present their findings at a meeting sponsored by the American Physiological Society (APS; www.The-APS.org). The conference, The Integrative Biology of Exercise V, will be held September 24-27, 2008 in Hilton Head, SC.

Related Items
← Previous Story High-Protein Breakfasts Reduce Snacking And Binging Later
Next Story → **MYTH ALERT**: If I lift weights, I will bulk up because of my high testosterone