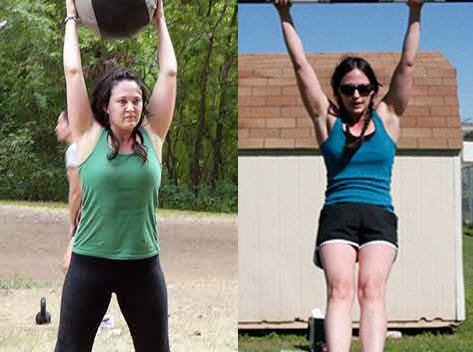 How I gained it: I was diagnosed with Graves’ disease (hyperthyroidism) in the summer of 2008 and opted for radiation therapy as treatment. While the treatment took care of my Graves’ disease by killing my thyroid it also left me extremely hypothyroid, with no metabolism to speak of. Normal thyroid ranges end at 6, and by October I was a whopping 43. The weight piled on continuously. I developed very unreal expectations about what it would take to lose it and maintain my weight. I figured once the doctor got my thyroid medication worked out, the weight would come off again.

One of the reasons I was initially hesitant about the radiation therapy is that I had never met anyone who had stayed at a healthy weight following the procedure. Everyone complained about the fast weight gain, and here I was following right along in their footsteps! My stepfather died before Thanksgiving and set the stage for an intense period of emotional eating. I coupled my grief with the overall indulgence of the holidays and denied myself nothing. I still exercised regularly, but had stopped seeing results.

Breaking point: My a-ha moment occurred when I came across a thyroid bulletin board and read a woman’s complaint about “wanting to eat like everyone else and not gain weight” and “once the meds kicked in, it would be better.” That’s when it clicked in me that the “old me” was gone. The person who enjoyed pizza and beer a few nights a week and who could afford an occasional ice cream binge was gone. Over. Done. My body could no longer handle that food, and if I really wanted to be a healthy person, I needed to step up and make some very difficult and very adult decisions.

I couldn’t rely on medicine to get me back to what I considered normal. I had to go ahead and take charge to get back there myself.

How I lost it: The only thing that I had total control over was my diet, so I started there. I decided that the voice in my head that told me it was OK to eat poorly was actually a 3-year-old. Each time that childish little voice approached me with “It’s OK to have bread right now,” I equated it to a 3-year-old requesting Skittles and Mountain Dew before bedtime. Ludicrous, ridiculous. No. This was a very helpful method for me.

RELATED:   Weight Loss Before and After: Elizabeth Stared Bike Riding To Lose 100 Pounds

The next step was to remove all calorie-dense foods from my diet: Dairy, grains, anything with sugar and all alcohol. I kept a strict adherence to meat, vegetables, nuts/seeds and fruit. I allowed myself small amounts of black beans and sweet potatoes a couple of times a week, but limited those high-density foods to post-workout meals, and I rarely ate them in the evenings.

My diet was being altered in a way that went against 27 years of training, and I promised myself no tricks. No fake sugars or gluten-free breads. If I was going to go down in a ball of fire, I wanted to at least do it with real food and not chemicals.

Technically, I was following a modified Paleo diet, and I used the Zone diet to help with portion sizes. It was the hardest thing I have ever done and ranks right up there with quitting smoking. Some nights the cravings were so bad that I just put myself to sleep at 7:00 p.m.

When I did slip up — and it happened more times than I’d like to admit — the next day was horrible. I had a hangover from cheese — who would have thought that would be possible? I started thinking about my food in terms of how it would make me feel, instead of how it would taste. Eventually I began to crave things my body needed. I might be the only person on the planet who considers raw chard stalks and sausage comparable to ice cream. But it’s true: I love them.

Between December and March, I increased my workouts to four to five days a week, the longest workout were 45 minutes, the shortest were 15. The CrossFit style of exercise was instrumental in helping me shed the pounds.

During hypothyroid states, joints can be very painful and general strength ability is unpredictable. Routines are hard to keep, as each day brings with it a different level of exhaustion. The constantly varying exercises of CrossFit kept me from getting bored and prevented my body from hitting a plateau. I built lean muscle mass by lifting heavy weights to help me continue to burn stored fat in the hopes that if I ever found myself in an extreme hypothyroid state again, my body would have all the tools needed to maintain its healthy state.

My thyroid hormone is still up and down. In fact, my thyroid is actually growing back at the moment, so the medication is in a constant state of flux. But I’m not nearly as worried as I would have been a year ago. I can’t stress enough how much confidence I gained in myself by changing my diet the way that I did. I no longer feel out of control. I no longer fear my body’s changes. Most importantly, I have developed a new relationship with food that centers around keeping my body healthy, rather than eating to solve a problem. This will last me the rest of my life.

It was unbelievably hard , but it was sixteen weeks of work for a lifetime of even keel. That’s not too shabby. Thyroid issues seem insurmountable and doctors can make you believe that once the meds are worked out, you will feel normal again. Altering my diet gave me the confidence to take back my life, away from a reliance on medications. I still take that little pill every morning, but I do it for reasons other than weight management.

It took Erika 16 weeks of solid training and strict adherence to the Zone to lose 17 pounds, 10 percent body fat, 13 inches and three dress sizes. She has maintained her weight loss for 8 months.