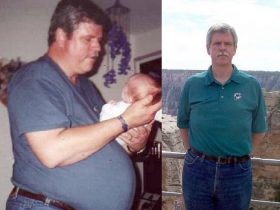 Personal life: “I am a single father residing in Dunwoody Ga,” he says. “I share custody in raising my 8-year-old-son, Darius Williams. I also work in Dunwoody for Crawford & Company.”

Turning point: “My turning point was literally sitting in the car eating a footlong steak and cheese with fries and passing out in the parking deck — I said enough was enough,” says Williams.

Diet plan: “I primarily followed a modified eating program consisting of 5 to 6 small meals per day that always includes a portion of protein and carbohydrate,” he says. He starts the day with 2 boiled eggs, grapefruit followed by a midday protein shake. Lunch is a chicken breast sandwich on whole wheat with steamed vegetables and green tea. Dinner is grilled tilapia with brown rice and a small salad.

Exercise routine: “Running is my primary exercise which I perform daily now,” he says. “I have a yoga session and a plyometric session once a week, in addition to weight training a couple days a week.” Plyometric exercises involve moving at a high intensity, usually jumping, to cause rapid muscular contactions which build strength and coordination. “I was able to train during my lunch hour,” he says. “I have a great support group at work as well as the gym.”

Biggest challenge: “My biggest challenge remains with nutrition,” he says. “I tend to make some bad food choices from time to time. However, I tend to get back on track with a strong workout.”

How life has changed: “Prior to my weightloss, I had become socially inferior,” he says. “I wanted very little face-to-face interaction with my friends who [were] not aware that I gained over 100 pounds since college. Having a strong support group along with the ability to inspire others [has] kept me moving forward.”