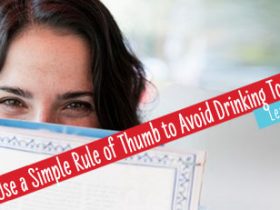 Use a Simple Rule of Thumb to Avoid Drinking Too Much

Drinking a lot of water is often advised to those who are trying to lose weight, but a nutrition expert at the University of Alabama at Birmingham says it is not the magic bullet to weight loss.

“There is very little evidence that drinking water promotes weight loss; it is one of those self-perpetuating myths,” said Beth Kitchin, Ph.D., R.D., assistant professor of nutrition sciences. “I’m not saying drinking water isn’t good; but only one study showed people who drank more water burned a few extra calories, and it was only a couple of extra calories a day.”

Kitchin says another water myth is the consumption rule: eight 8-ounce glasses of water per day.

“Yes, people do need to get fluids; but it does not have to be water,” Kitchin said. “There’s no evidence that it melts away fat or makes you feel fuller, so if you don’t like water it’s OK.”

While Kitchin says water is the best hydrator, fluid replacement does not have to be in the form of water. For those who do not like to drink water, Kitchin suggests:

Also, Kitchin says coffee and other caffeinated beverages do hydrate.

“People think coffee doesn’t count, but actually it does,” Kitchin said. “When you drink coffee, your body is retaining much of that fluid — especially for people who are habituated to drinking caffeine, as the body adapts, resulting in a reduced loss of fluids.”

A final water myth Kitchin wants to put to rest is that the temperature of drinking water affects weight loss chances.

“You will hear that ice-cold water helps burn extra calories,” Kitchin said. “While there may be a few extra calories lost, it won’t be nearly enough to make a dent in your weight-loss endeavors.”

If losing weight is the goal, Kitchin suggests trying long-running weight management programs based on real research — like EatRight by UAB or Volumetrics.

“These plans were built on the premise that if you eat lower-calorie, ‘heavier’ foods, you’re not going to magically lose 25 more pounds than somebody on different diet, but it might help you feel fuller and not hungry,” Kitchin said. “While drinking water may not help you lose weight, a focus on eating foods with high water content like fruits, veggies and broth-based soups can.”