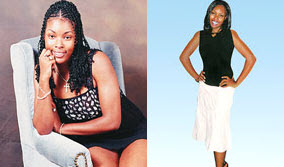 “I Cut Portions and Dropped the Baby Weight”

After her daughters were born, Dawn Scrutchins realized the extra 50 pounds she was carrying weren’t going away. She vowed to lose weight — even getting up at 5 a.m. to work out — and brought her weight down to a healthy 135 pounds.

Having two babies within a year of each other left Dawn Scrutchins carrying an extra 50 pounds. She wasn’t too worried, though. “I’d never had trouble staying in shape, even though I didn’t exercise. I figured my body would bounce back,” says the retail manager from Dublin, Georgia. But four years later, she was still overweight. “I was finishing school and caring for my girls. With no time to cook, I lived on supersized fast-food meals.”

Dawn weighed 120 pounds until she got pregnant. “You’re supposed to eat a little more when you’re expecting, but I went overboard,” she says. “I craved sub sandwiches loaded with meat, cheese, and dressing — and ate them two at a time.” After her youngest was born, she was up to 170.

Then Dawn saw a photo of herself sitting on a sofa. “My face was round, my thighs were huge. I realized that my metabolism had changed. I was going to have to start exercising if I didn’t want to look that way forever.”

That day, Dawn bought a treadmill and a few Pilates tapes and started working out five days a week. “I had to get up at 5 a.m. to fit it in — but it was worth it,” she says. She also ate more roast chicken and lean pork, substituted water for soda, and treated herself to cookies or doughnuts once a week instead of every day. Within five months, she was down to 135 pounds.

Dawn’s daughters, now 11 and 12, have also benefited from her lifestyle changes. “We talk about exercise and nutrition all the time,” she says. “I’m glad I can be a healthy role model for them.”

The Diet: Breakfast is hard-boiled egg whites and oatmeal. At lunch, Dawn has roast chicken and a salad. For dinner, she eats pork chops, brown rice, and green beans. Dawn snacks on prunes, yogurt, and nuts.

The Workout: Fifty minutes of cardio, usually walking or running, and 30 minutes of strength training or Pilates at home five days a week.

Biggest Temptation: Anything her mom bakes. “I especially love her amazing chocolate cake. It would be impossible for me to give it up, so I eat it on special occasions.”

What She Couldn’t Wait to Wear: A fitted black jumpsuit. “It hugs every curve. I never would have worn something so clingy when I was heavy, but I love the way it looks on me now!”

Related ItemsAfrican AmericanMommy MakeoverOver 30 Pounds LostSEOSuccess Storiestreadmill
← Previous Story 115 Pounds Lost: Emily Loses Weight And Finds Out How Strong She Really Is
Next Story → I Lost Weight: Jennifer Walked Laps Around Her Apartment Complex And Lost Half Her Body Weight