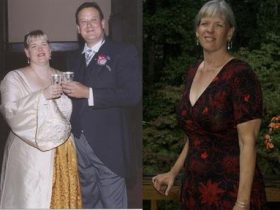 Weight Loss Before and After: Kathy Loses 143 Pounds By Counting Calories

How I Gained It: For the most part, I was always a chubby kid throughout grammar school and high school. I lost the weight and became skinny for a few years, but then I got back into a comfort zone. I stopped working out and began eating unhealthy food in excessive quantities. Most of my time was spent at home eating junk food all day and night.

Throughout my years of gaining weight, I was in total denial. I made excuses that my clothes were shrinking or getting old. I lied to myself when I looked in the mirror.

Breaking Point: There were a bunch of little signs that I needed to do something — chairs I sat on regularly would eventually break, and I broke the drivers seat in my parents minivan. I also had trouble bending over to tie my shoes. When I was younger I liked playing basketball, and I noticed I couldn’t keep up in a game because of my weight. After a couple of years, I realized how heavy I’d become from pictures. I hadn’t weighed myself in years, but when I finally stepped onto a scale I was shocked to realize I was 300 pounds.

How I Lost It: My first step was getting active. I started using the gym membership that was provided by my job and I began eating healthy. The biggest change I made to my diet was my carb intake. I cut how many I was eating and made sure the carbs I did eat were the right ones. I also started eating very small portions.

I also changed when I would eat, especially in the evening. I started eating dinner at 6 p.m., and I’d eat nothing after. After dinner I’d head to the gym, where I’d work out for up to three hours. The fat started melting off my body — I lost 30 pounds in the first month! I’d do cardio five to six days a week and incorporate two days of resistance or weight training. I’d also add in an aerobics class here and there.

Being active was a big priority for me. I cut down my social life, stopped eating unhealthy foods and eliminated alcohol. But I did allow myself one cheat meal a week.

After I lost the first 70 pounds, I was light enough to use the treadmill so I started running. I began running for one minute, then walking for one minute until I was able to run upwards of five, 10, 20 and 30 minutes at a time. As I got into better shape, built up my endurance and became lighter, this gradually got much easier. My body fat went from 41 percent to 12 percent.

As I got closer to my target weight, I began re-introducing more carbs into my diet and incorporated more weight training to begin the sculpting phase. I didn’t want to be “skinny” — I wanted a toned look. These days, I do 45 minutes of weights a day, followed by 20 minutes of cardio. my diet consists mostly of brown rice, lean chicken, one protein shake a day, lots of veggies. I don’t deny my body food — if I’m hungry, I’ll eat something.

Now that I’m at my goal weight, I’ll even eat fast food — I just make better decisions. Grilled chicken sandwiches are my meal of choice. I try to get in a majority of my carbs earlier in the day and taper them off by the end of the day.

I’ve met a lot of people in similar situations along the way — I just tell them to keep pushing. Nobody gains hundreds of pounds overnight and no one can lose it overnight, but if they stick to a plan, in time they will see results. Losing the weight has been the most rewarding experience in my life and the best decision I ever made.

Chris has maintained his weight loss for three years.