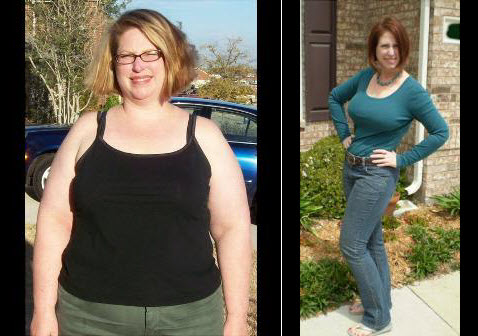 We had gained and lost the same 30-40 lbs. every year for 11 years that we have been together (except when I was pregnant). The Summer of 2006 was like the other times. I would lose those same 35 lbs through diet and lots of exercise and was on a good roll until September when my world crashed. My grandfather, my mentor and role model had a stroke and passed away.

He was 91 years old, lived a very healthy lifestyle including walking every day. I believe he lived as long as he did because of his lifestyle choices. I dealt with it the same way I deal with most difficult times in my life, through eating and subsequently gained back the weight I had lost that summer, plus a few extra pounds. A decade of this repeated pattern of gaining and losing, I determined I needed some outside help to lose the weight and keep it off, permanently. At 5’11”, I weighed 267 pounds, over 100 pounds over my ideal weight. My BMI was 38 and I was obese, and I wore a size 22.

My husband, taking 5 medicines daily for high blood pressure, had diabetes, and borderline sleep apnea, is 6’6″ and somewhere over 350 lbs. I wasn’t sure of his exact weight because our scale doesn’t go over 350 lbs. and he wasn’t talking. His BMI was somewhere over 40 and he was morbidly obese. His shirts were 4XL and his pants size came in at 48. Neither one of us could qualify to get term life insurance to protect our 3 children should something happen. I was despondent but determined to find a solution to our dilemma. Our internist, recommended the Lap Band for both of us.

He told us that high blood pressure and diabetes were lifestyle diseases. Mike had them, and it was only a matter of time before I did also. I love to cook good southern comfort food: fried pork chops, homemade baked macaroni and cheese, my famous and delicious cakes, and of course, everything from scratch. Our restaurant choices included all-you-can-eat buffets, Mexican food, and places where the servings were large. We were traveling down a dangerous road and most importantly, we have 3 young children who are following right behind us adopting the habits that we had.

I wanted the obesity legacy to end with us, and we had to do something somewhat drastic and extreme, because it was obvious that after 10 years together, we couldn’t do it on our own. We were like the Alcoholic living at a bar, married to the bartender and we had to make some serious lifestyle choices, and surgery looked like a way to help. Our insurance company has a written exclusion that they will not, under any circumstances, cover weight loss surgery. We had to research other options and being in Texas, I had heard of others going South of the Border for various surgeries and began searching on the web for more information. Since I was going to be self-pay, and at that time having the surgery in Dallas was $15,000, I found a surgeon in Mexico and left a message to get more information. Dr. Alvarez personally called me back within one hour.

We talked about my options and I began researching more about him and the Lap Band. His clinic is directly across the border from Eagle Pass, Texas, a mere 7 hour drive from Dallas. The price for the Lap Band procedure was $6,500 including one night in the hospital and all fees. Obesityhelp.com provided to be a great resource where I found impressive patient testimonials on Dr. Alvarez, others who had undergone weight loss surgeries by him. Well meaning but uninformed, my family and friends that I told were shocked. They said I was going to come home with a massive infection, one thoughtful person said I might wake up with only one kidney, and others said I would end up in a bathtub on ice in some dark alley in Mexico.

I must be crazy, did I know that there are drug cartels killing people in the streets over there? How did I know he wasn’t going to put a few cuts on my stomach, send me home with no Lap Band in place and keep my money? I followed my instincts that said to trust this doctor, contacted several of his former patients and felt confident in my choice. Being the braver one in the relationship, I went to Mexico in March, 2007 weighing in at 267 lbs. and a size 22. After 14 months, I now weigh in at 171, and am a size 12. I am about 10 pounds from my final goal. After my success and saving up our money, we sent my husband down there to get the gastric sleeve surgery by Dr. Alvarez in September, 2007.

RELATED:   Weight Loss Before and After: After Being Bullied Liz Lost 111 Pounds

A newer procedure that removes 75% of the stomach including the gherlin hormone that produces hunger, it is a promising and successful alternative to the Lap Band and the bypass. Within 6 months, my husband had lost over 100 lbs. More importantly, his diabetes was eradicated 9 days after getting his surgery, he now takes only one medicine for high blood pressure, and he sleeps soundly every night. His beginning weight was 369, he now weighs 244 lbs, down 125 lbs, and wears a comfortable XL and pants are size 38. Losing the weight for him was fairly easy, as his stomach can only hold around 4-5 ounces of food at a time and won’t stretch out like the stomach stapling surgery from the 1970’s. Today, we are active with our children.

We walk places instead of driving. We take our kids to the local high school track in the evenings instead of sitting in front of the TV. No more buffets, our restaurant choices include places with good soups or healthier entrees that we always split instead of ordering two separate meals. We are positive role models for our children to follow and make good and healthy choices. I still enjoy cooking but find that making a homemade protein-rich chili is just as enjoyable as the old fried pork chops I used to cook. I still turn to food when I get depressed or stressed out as it’s a tough habit to break. The Lap Band acts as the “Food Police” and I stop after just a few bites.

I have learned not to eat anymore, or I will end up vomiting in the bathroom. You only have to do it a few times to learn that those cookies just aren’t worth that horrible feeling. My grandfather is smiling down at my husband and I right now. His work is done but he will never be forgotten. To read our testimonial on Dr. Alvarez go to: www.endobariatric.com To email Misty for information or questions: misty@mymexicopsjourney.com