Male Before And After Weight Loss: I Lost 130 Pounds By Counting Calories 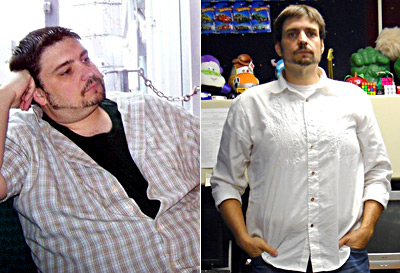 Once too big to ride a roller coaster, Bryan Kinnamon dropped 130 pounds playing basketball, riding a bike, and keeping a food journal
Before: 380 pounds
After: 250 pounds
Height: 6’1”

In high school Bryan Kinnamon was known as “Big Boy.” After graduation, life got busier and he became less active. The systems administrator from Independence, Kan., spent his time watching too much TV and eating—not because he was hungry—but because food tasted good. “I would eat until I could not eat anymore, and then I would think about the next meal,” he says. When he became a father, he used his children as an excuse to stay in and be lazy, and his sedentary lifestyle worsened.

The Turning Point
In 2008 Bryan, who is 6’1”, had to exit a roller coaster because the safety latch could not close. A look of disappointment fell across his son’s face while other riders looked annoyed. “The embarrassment and disappointment was the kick in the pants I needed,” he says.

The Lifestyle
Bryan decreased his calorie consumption to the bare minimum and started playing basketball every day during lunch. It was a challenge at first, but he knew the payoff would be worth it. “The first month I would wake up in the middle of the night feeling like someone was stabbing me in the stomach.” After a year, he added an hour-long bike ride to his daily workout, which pushed him over the 90-pound hump. He also keeps a food journal and tracks all his meals.

The Temptation
Like many people, Bryan has a hard time eating right when he’s on vacation. But if he slips up, he considers those moments as setbacks, not bad days. He stays motivated by the scale and the faces of his children when the family gets out of the house to do activities they couldn’t do before.

RELATED:   Real Weight Loss Success Stories: Amber Sheds 140 Pounds And Gets Her Body Back In Shape

The Reward
He attended a family get-together and sat in the room for 30 minutes before anyone figured out who he was.

Indulge a little. He allows himself to enjoy a good meal on Friday night—without recording it. “But in the back of my head I know how hard I would have to work to get it off, so I don’t go too crazy.”