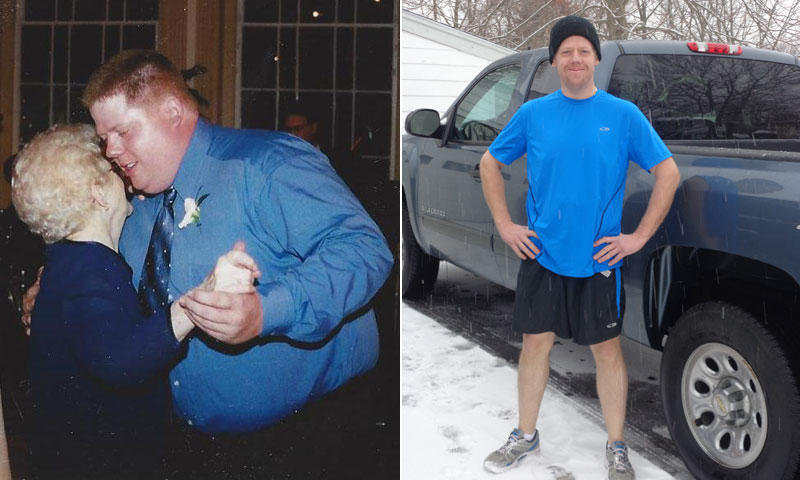 How I Gained It: Since I can remember, I felt overweight. I played soccer as a kid for a couple of years, but my parents both worked full time, and it was difficult for them time-wise and financially to keep me in organized sports. I ended up spending most of my time in front of the television, eating out of boredom.

When I reached high school, I played football. My position was offensive tackle. The goal was to be big — the bigger the better. When I graduated from high school, I didn’t have those twice-daily workouts, but I still ate with that mentality in mind.

In my early 20s, I started a job as a security officer. It was a very sedentary job; I would walk around and check the property to ensure everything was ok, but most of the time, I was sitting. I was on the graveyard shift, so my routine consisted of grabbing a couple of donuts and a creamy coffee drink before finishing up my shift. I would then literally sleep most of the day.

When I woke up, it was dinnertime, and I would eat a big meal, then go back to work. At work, I would continue to make pit stops at the local donut shops and quick marts to get sugary drinks and snacks to keep me awake. During this time, I gained about 30 to 50 pounds.

In my mid-20s, I decided to become an EMT. It was a stressful period in my life. I was studying a lot and was financially struggling to put myself through school and still work at the same time. The lack of time and money didn’t give me a lot of healthy food options, as the cheapest, quickest food was junk food. I had easily gained around another 50 pounds.

Throughout my 30s I had gained another 100 pounds. In my spare time, when I wasn’t on a call as an EMT, I was spending about 42 hours a week in the virtual world of online gaming. I avoided the outside world as much as possible, being 385 pounds, as it was just too difficult to try and accomplish even simple tasks. I couldn’t just walk into a store and try on clothes because I could never find my size. I would be discouraged walking around seeing all the designer clothes that I wanted so badly, but knew I could never wear, and that would send me to a coffee shop for donuts or to a drive through.

RELATED:   Before And After: Brittany Amazing 70 Pound Weight Loss Transformation

My job as a paramedic is physically demanding and tough, even when you’re in the best of shape. But being severely overweight magnified the demands tenfold. At 385 pounds, my weight was impacting my ability to perform some aspects of my job. My supervisor, who was caring and supportive, expressed his concerns about my weight and offered help if I needed it. I was surprised by this intervention and somewhat offended, because I wasn’t ready to hear it. That changed to fear as I went to work each day, concerned I would be told to lose weight or lose my job. On more than one occasion, after climbing to the second floor of a home, I would be more winded than the patient complaining of shortness of breath. I’ve also had calls where patients would comment that they thought I needed the ambulance more than they did.

Breaking Point: My turning point came one day when my partner and I answered a call from a person who lived on the basement floor of a three-story complex. The patient, who was also obese, was having back pain and was unable to get himself up off the floor. We had to place him on a special stretcher so he could lie flat. My partner, two firefighters and I each took a corner of the stretcher to carry him out of his apartment and up the stairs. When we reached another flight of stairs to exit the building, I was already breathing heavily, feeling weak and was close to dropping my corner of the stretcher from pure exhaustion. In that moment, I realized how devastating it would be to go from helping a patient to potentially hurting one. By the time we reached the ambulance, I was in such bad shape that I could not help lift the patient inside. Fortunately, I was able to continue with the call, but struggled to recover from the exertion. From that day on, I knew that I had to do something about my weight and my health.

RELATED:   Before And After: Sabrina Loses140 Pounds By Changing Her Lifestyle!

How I Lost It: A co-worker was having great success with the Jenny Craig program, and she was heating something up that smelled really good in the kitchen on day. We struck up a conversation about the program, and I decided to give it a try.

I needed tools and structure to get the weight off safely. My Jenny consultant worked with me every week to make losing the weight as simple as possible, while also helping me learn an overall lifestyle changes that I would always have in my pocket. She also taught me that I could add activity into my daily life, as I was so sedentary before. Little tricks really helped me, like parking as far away in the parking lot as I could to get in extra steps and taking the stairs instead of the elevator.

I never ate vegetables and fruit before, but I learned about how to add them into my diet to fill up on fewer calories. And I actually learned that broccoli tastes good, even without cheese!

My consultant guided me to start walking on the treadmill at a very slow pace for 10 minutes. I slowly worked my way up to more speed and time. Within a year, I was running my first 5K. I have become so much more active and try to spend as much time away from my computer as possible. I went from not working out at all to now working out three to five times a week. I run outside now, as well as working out at the gym. I have even taken part in a road race and a 28-mile cycle rally. Today, I am able to run more than 12 miles at a time and am training for my first 20-mile run! I cannot believe that I crave running and going to the gym. If I don’t work out for a couple of days in a row, I don’t feel like myself. I can now play with my niece and nephews and out-run them!

I am the person I always knew I could be and have the confidence to take on bigger challenges. I can now fulfill my job and my purpose of helping people, because I got the help I needed for myself.