The Color of Your Plates Matters 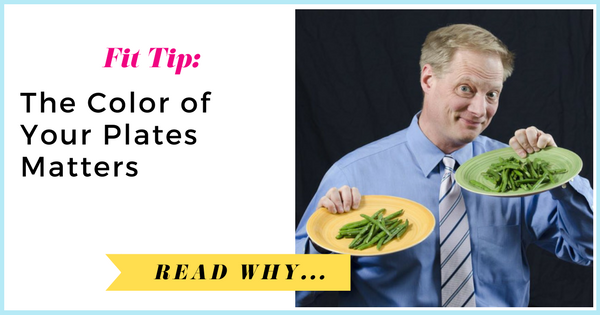 Does the color of your plate affect how much you eat? A new study by Dr. Brian Wansink and Dr. Koert van Ittersum indicates that it does – or more specifically that the color contrast between food and plate creates an optical illusion known as the Delboeuf illusion, after the Belgian scientist who discovered it in 1865 that induces you to take more than you realize. According to Delboeuf’s findings, when one looks at concentric circles, the perceived size of the interior circle changes when the circumference of the outer circle is altered: as the outer circle becomes larger, the perception is that the inner circle becomes smaller. But, you might be wondering how can this relate to portion size and plate color?

Continuing with their previous research on this topic published in 2006 and reported in ‘the Large Plate Mistake!’ in this section, Wansink and van Ittersum recently conducted a series of experiments to investigate other possible effects of the illusion on food serving behavior. In these new experiments they explored the effect of the color contrast between the plate and the food, and between the dinnerware and the background (i.e. tablecloth), the combined effect of plate size and color contrast between food and plate, and the effect of attention, or mindfulness, and education on the Delboeuf illusion.

In addition, Wansink and van Ittersum once again confirmed that the larger the plate, the smaller people perceive the portion being served on it; that even being aware of the Delboeuf illusion does not necessarily counter-act its affects and that while education and awareness do help people make better choices, the Delboeuf illusion still impacts participant’s serving sizes. So, when setting your dinner table keep in mind the Delboeuf illusion and use these findings to your advantage!

Change your dishware to better accommodate your dining needs. If your goal is to eat less, select plates that have high contrast with what you plan to serve for dinner. Want to eat more greens? Try serving them on a green plate! If replacing dinnerware is difficult, remember that tablecloths are important, too. By selecting a cloth with a low-contrast to the dinnerware, you can minimize the effect of the Delboeuf illusion and lower the likelihood of over-serving. Finally, remember The Large Plate Mistake! If you can’t change the color of your dinnerware, using smaller plates leads to choosing smaller portions.

Related Items
← Previous Story Distracted eating may add to weight gain
Next Story → Dumbbells or Bands, which are better?