Men Before And After Weight Loss: Grant Slims Down 80 Pounds To Avoid Health Problems 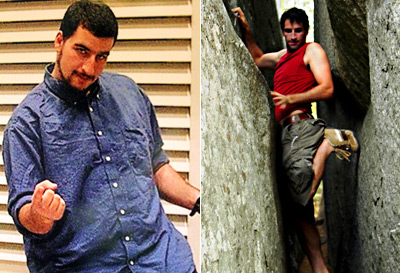 After watching his dad suffer with weight gain and diabetes, Grant Donovan put down his fork, picked up a basketball, and lost 80 pounds

After his father remarried an emotionally abusive woman, Grant Donovan, a writer in Los Angeles, started gaining weight at age 10. He found himself eating all the time, especially when he was bored. “It felt like food was filling some void,” he says.

Grant witnessed his father, who has type 2 diabetes, struggle with daily tasks like getting in and out of a car because of his weight. “I realized I was on the same path and wanted to change it,” he says.

He set out to eliminate 500 calories and lose a pound a week. With a target weight in mind, he steps on the scale every morning, and the number staring back at him determines the amount of calories he’s allowed that day. In addition to counting calories, he started playing pick-up basketball at a local court. Traditional forms of solo exercise never appealed to him, but he always loved games. And he quickly learned that playing a game with strangers doesn’t have to be intimidating. “Nobody expects you to be Michael Jordan,” he says. “Everyone is just looking to have fun and get a workout of his own as well.”

Grant knows it’s easy to get frustrated when you’re no closer to your goal weight than you were the week before. But he stays motivated by focusing on the future. He thinks about the kids he wants to have one day. “I want to be able to run and play with them. I want to be able to lift them up over my head. I want to walk my daughter down the aisle.”

His driver’s license photo was taken in 2003. And he loves the surprised look on people’s faces when they realize he’s the same guy pictured in his ID. Some compliment him on his weight loss; others inquire about his secret. But success has its drawbacks, too: Several bouncers have refused to let him into clubs without showing additional identification.

Be patient. “Weight loss is a marathon not a sprint. It’s not about losing weight—it’s about a lifestyle choice.”

Slow down. “Chew slowly and put your fork down between bites, at restaurants and at home.”

Be frugal. “Don’t be afraid to save half your meal for later.”