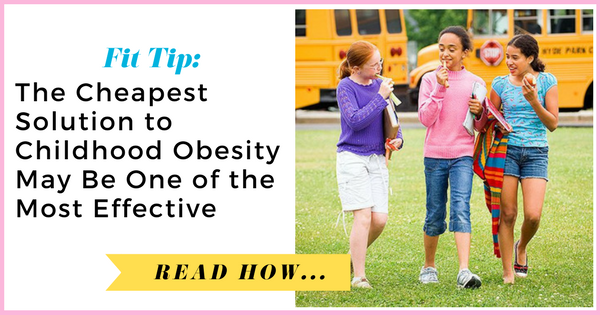 Efforts to combat childhood obesity often focus on taking things away: From removing soda machines from school to removing sugar, fat, and processed grains from cafeteria menus, it has been a battle of subtraction. But it turns out that the cheapest, most effective way to slim down America’s youth may be to give them healthy food at school—and make it free.

That may seem like a common-sense approach, but as the entrenched battle of school lunch standards has shown, reducing the amount of unhealthy food kids eat in lunchrooms is no simple matter. According to a new study conducted by researchers at the University of Arkansas, however, giving them free fruits and vegetables is.

The study, published in the journal Applied Economics Perspective and Policy, looked at the U.S. Department of Agriculture’s Fresh Fruit and Vegetable Program. Established by Congress in 2002, the program gives elementary schools with high enrollment of students who receive free- and reduced-price lunches between $50 and $75 per child per year to provide free fruits and vegetables for between-meal snacks. The researchers found that in Arkansas—where 20 percent of 10- to 17-year-olds are obese, one of the highest rates in the country—the program led to a 3 percent decline in obesity. A 2011 study found that the breaking-even point for investment in reducing childhood obesity was between $280 and $339 per child per year—and that would only achieve a 1 percent drop in the rate.

“By this measure, our results suggest that the fresh fruit and vegetable program is a very cost-effective obesity prevention tool,” Rodolfo Nayga, one of the study’s coauthors, said in a press release. “Moreover, prevention of childhood obesity is in addition to the other nutritional benefits that come from increased fruit and vegetable consumption.”

Over a lifetime, childhood obesity, which has been linked to diabetes, heart disease, and some forms of cancer, can lead to $19,000 in direct medical costs alone.

According to the USDA, there is $174.5 million of funding available for the Fresh Fruit and Vegetable Program in 2014–2015, which is enough to provide fresh fruits and vegetables to at least 2.3 million elementary school children across the country. Expanding the program to all of the nation’s 35.2 million pre-kindergarteners through eighth graders would take about $2.7 billion, or roughly the cost of fighting the Iraq War for one week.