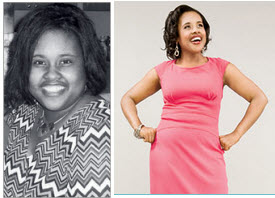 Weight Loss Success Story: Tanzy Loses 72 Pounds With The Help Of Her Family

I have always had a weight problem for as long as i can remember. I have struggled with emotional eating from an early age due to some childhood trauma. In 8th grade, i finally started to care and got down to 120lbs and looked the slimmest and best i had ever looked, but i still wasnt happy even being slim. The problem laid within me…

HOW DID YOUR WEIGHT AFFECT ANY ASPECT(S) OF YOUR LIFE?  My weight affected literally ever aspect of my life. I dwelled on my weight and the way i looked. In retrospect, my obsession even destroyed many friendships and relationships. My friends couldnt stand to be around me because i had such a bad problem with complaining and always being self conscious of my size compared to their size, they definetly tired of me very quickly and also at the fragile ages we were at, it was important to feel accepted into the group, but being overweight always seemed to make me feel like an outsider.

I remember in 9th grade when it got really bad, i would stay up late at night screaming because i couldn’t find anything to wear that i liked on me. Whenever i was at my heaviest weight at that certain point and age, it would rule how active i could be and even just by bending over and having hard times breathing because my stomach was to scrunched up to even function.

WHAT WAS THE “TURNING POINT” THAT GOT YOU STARTED ON YOUR WEIGHT LOSS JOURNEY?  I have had it seems like a million turning points where i dropped a certain amount of weight and kept it off for a while but then it always came back. In 9th grade i went through a really bad stage of depression and my emotional eating got so bad i put on 70lbs in a span of 3 to 4 months. I got up to being 198lbs. I couldnt step on the scale after that for fear of reaching 200lbs. I just went up and down from their, 30lbs off, 50lbs on, 27 lbs off, 50lbs on. When i got married in August of 2015, i weighed around 220lbs, then after i got married it seemed like all my self control or any sense of control snapped.

There was a night where i fell asleep with no stretch marks on my stomach and the next morning i was covered in them. My turning point before i set out on my journey of losing 90lbs was when i stepped on the scale on my husbands 19th birthday and i weighed 251lbs. My moms words of “you have done this before so do it again” was the last straw of me not doing anything about my weight.

HOW DID YOU GET STARTED?  My first steps were to download the MyFitnessPal app and start tracking my food as well as i started my journey of exercising 5 days a week for an hour. I have always known what to eat and what not to eat for my body so i had that nailed down pretty well since i have always struggled with eating the right foods for my body. They say getting back in shape takes 2 weeks, but in reality it took me 4 months. I exercised in my home for the first 3 months which was how long it took me to drop 20lbs.

Then that was when i decided to take the “BIG” step of going back to the gym that i have accompanied off and on for years. I slowly cut things out of my diet like eventually i cut out the piece of gluten free bread that i had with my eggs in the morning, then i eventually cut out the yellow cheese and put mazzerella cheese on my eggs, and then i finally reached the point of cutting out cheese altogether. After a month or so it finally became a habit of just choosing the right foods instead of the wrong foods.

HOW LONG AFTER YOU STARTED DID YOU BEGIN TO SEE RESULTS OF YOUR WEIGHT LOSS EFFORTS?  It took me about a month and a half to two months to drop 10lbs, and then after that the weight seemed to come off fairly quickly. I seen changes in my clothes almost right away because the inches definetly came off a lot faster than the pounds!

WHAT WAS THE HARDEST PART?  I do unfortunately have PCOS. I dont blame everything on that health issue because i made the choices of my lifestyle but PCOS definetly hasnt helped. When i reached a certain weight, my hormones started to function somewhat and from there it only got better with the more weight i got off. I have had to change my diet a lot. I am currently off wheat, soy, dairy, potatoes and corn. It isnt very easy having this strict of a diet but feeling good at night has ultimately become my biggest goal.

DID YOU EVER WANT TO GIVE UP? WHAT KEPT YOU GOING?  Exercise in the beginning was so tough, i definetly wanted to stop exercising. It was so challenging to keep going when you constantly felt sore and tired and out of breath. What kept me motivated was probably because i was so sick of living in my body and the number that the scale portrayed. Going shopping for size medium for the first time in 5 years has been such a HUGE joy for me!

DID YOU HIT ANY WEIGHT LOSS PLATEAUS? HOW DID YOU OVERCOME THEM?  I have hit more than a few of plateaus. My sister has always encouraged me to switch it up once a plateau comes. So that is exactly what i have always done! Switched up my exercise routine, and my diet routine! After a while i get creative once more and i switch it up.

HOW LONG DID IT TAKE YOU TO LOSE MOST OF THE WEIGHT?  It actually took me a year exactly to reach my 90lb goal of weight loss. I originally wanted to get 100lbs off but that hasnt happened!

DID YOU HAVE ANY NON-SCALE VICTORIES?  Yes when i reached 178lbs i got measured and i have had a total of 50inches come off my body! And snow skiing this year has been 10x easier being lighter and more in shape! I enjoy everything so much more being comfortable in my body and being in shape and always running around!

WHAT DOES YOUR DAILY DIET LOOK LIKE COMPARED TO WHEN YOU WERE HEAVIER?  My eating habits were anything and everything when i was at my heaviest. I didnt care what i put in my mouth. I was definetly a huge emotional eater and whenever i was having a rough day i definetly turned to the cupboards.

HOW DOES YOUR PHYSICAL ACTIVITY COMPARE TO WHEN YOU WERE HEAVIER?  Exercising and MyFitnessPal definetly became my best friend and are still to this day my best friend and i use them every day. It was super hard to not give up on exercise because it was so tough to get back into shape. Now i welcome the feeling of my heartrate up and sore muscles!