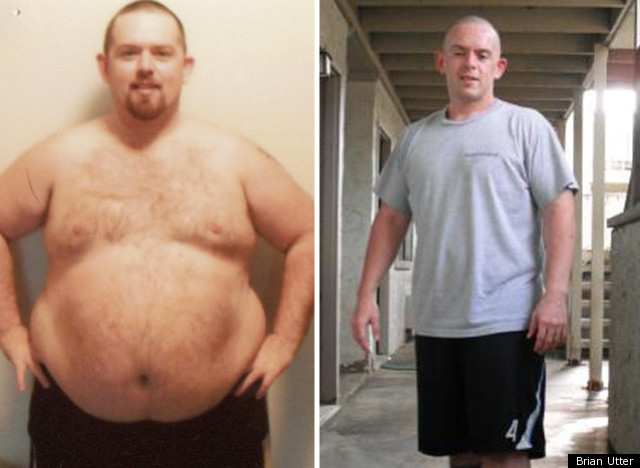 How I Gained It: I gained weight after my divorce — which had to do with my drinking, if I’m to be honest. And then it just got worse. I was drinking at least an 18 pack of beer every day, along with whatever hard liquor I had around. Along with my drinking, I was depressed and would binge eat. I would eat a whole pizza by myself, order two meals at whatever burger joint i went to, and my bill for a single trip to a place like Taco Bell was around $20 just for me. When I was at the bar with my friends I’d eat and where I live the bars close at 2 a.m., so after the bars I’d go to Perkins, I-Hop…whatever was open. So for me it was just a downward spiral.

Breaking Point: I would like to say that I had this “ It’s A Wonderful Life”-type moment and realized what the world would be like without me, but I would be lying. My motives were more selfish, and inspired from fear…fear of dying, to be specific.

I received a phone call at 3 a.m. one morning with the news that my mother had a heart attack and was in the hospital. At this time I lived three hours away from my mother, and during this drive I had a lot of time to think. What did I think of? Myself! I was scared of dying. I thought about the fact that I was so heavy — that I couldn’t get off the floor without it exhausting me — and I thought about my father dying at age 32. At the time, I was four months away from turning 32. I thought about my mother having a heart attack before she even turned 50. I thought about my grandmother who has diabetes. I thought about how almost everyone in my family who had passed away had either done so from heart-related issues or diabetes, both of which I believed to stem from obesity. So to keep myself around longer and the only course of action I could think of was to lose weight.

RELATED:   Weight Loss Before and After: Haley Loses 105 Pounds On Her Weight Loss Journey

I started trying to eat healthier and tried to start exercising. I failed! I couldn’t stop eating the wrong things, I couldn’t stop drinking, and I couldn’t figure it out. Then I saw this infomercial for P90x so I ordered it…and I failed again. I couldn’t even pass the fit test. So I sent it back. But I saw on this little card in the box the Beachbody website, so I checked it out, and I saw a program called Power90 — a beginner program for someone like me.

How I Lost It: I started Power 90. This guy talked about modifying moves you couldn’t do, which was great. And the biggest thing for me — it came with a simple food plan that I could understand and follow. And it didn’t taste like cardboard! In the first month I lost 21 pounds, and I was feeling better, I was eating better, I could do real push-ups, and my clothes felt looser. And I wasn’t drinking. Unfortunately, one day while I was working out, I felt a pop in my calf and I couldn’t stand on my leg. My doctor told me I had torn my calf muscle and that I wouldn’t be doing anything on my feet for six to eight weeks. When I heard that, I immediately wanted a drink and some food. I felt like I was going to lose all my progress. But, thanks to my fiancee Casey, I didn’t. Instead we started a program called Turbo Jam that Beachbody had accidentally sent me when I ordered Power 90, and they had told me to just keep. I figured out the I could sub some of Chalene’s workouts in for the cardio of Power 90 and this would keep me from doing any high impact stuff, since I could modify Turbo Jam to be able to keep going. I finished Power 90 with a total weight loss of 51 pounds and a better understanding of myself.

RELATED:   Weight Loss Before and After: Gerri Lost 86 Pounds With The Help Of Her Personal Trainer

I then decided to give P90X a shot again, so I started my next 90 days of hell! Once again here was the fit test, but this time I could do some of it! So off I went. This program had its challenges for me — the food plan seemed daunting at first, but eventually I figured it out, and had to teach myself how to eat more! It sounds crazy, but I was eating more than 3,000 calories and still losing weight! Every week I got stronger and saw more improvements. Over the 90 days I lost another 21 pounds.

During the next year, I did hybrid programs of P90X and Turbo Fire, another round of P90X and I lost another 49 pounds. I learned what I was capable of, I learned what my weaknesses were and had started to decided that I wasn’t doing this to be selfish anymore but I was doing this for my family, and for anyone that I might accidentally inspire. I was doing this to be an example for my kids, to give my fiancee the man she deserved, and to come to a somewhat-OK place with myself.

Seventeen months later, I still haven’t had a drink, I quit smoking, I don’t drink soda and I have lost a total of 128 pounds.