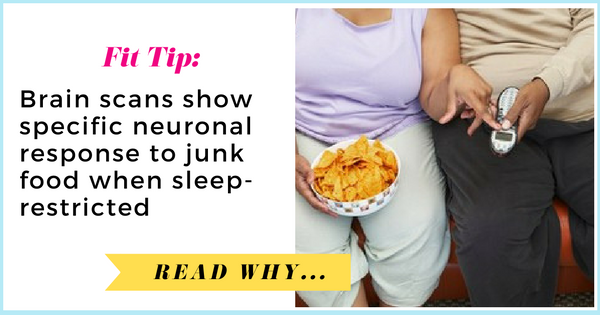 The sight of unhealthy food during a period of sleep restriction activated reward centers in the brain that were less active when participants had adequate sleep, according to a new study using brain scans to better understand the link between sleep restriction and obesity.

Researchers from St. Luke’s — Roosevelt Hospital Center and Columbia University in New York performed functional magnetic resonance imaging (fMRI) on 25 men and women of normal weights while they looked at images of healthy and unhealthy foods. The scans were taken after five nights in which sleep was either restricted to four hours or allowed to continue up to nine hours. Results were compared.

Previous research has shown that restricted sleep leads to increased food consumption in healthy people, and that a self-reported desire for sweet and salty food increases after a period of sleep deprivation. St-Onge said the new study’s results provide additional support for a role of short sleep in appetite-modulation and obesity.

“The results suggest that, under restricted sleep, individuals will find unhealthy foods highly salient and rewarding, which may lead to greater consumption of those foods,” St-Onge said. “Indeed, food intake data from this same study showed that participants ate more overall and consumed more fat after a period of sleep restriction compared to regular sleep. The brain imaging data provided the neurocognitive basis for those results.”