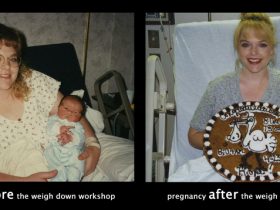 A recent study published in Obesity in May 2016 (1) reported very discouraging findings for a group of participants who had lost weight on “The Biggest Loser” (TBL) reality TV show: not only did almost all of them regain a significant amount of weight over the 6-year period following the show, but they also had lower resting metabolic rates than expected for their body weights, even six years later. With the way the media ran with this story, it will not be a surprise if everyone just gives up staying thinner and blames excess weight on a faulty, and unchangeable, metabolism.

However, there are a number of factors that impact body weight and weight regain after loss, not just resting metabolism. How much physical activity people do daily and what type, the types of food that people eat, how many calories they actually ingest daily and when they consume them, stress management, and sleep patterns also have an impact on weight maintenance and regain after loss, among other things.

My issues with this study and with TBL’s approach to weight loss are the following:

With regard to that last point, much can be learned from studying members of the National Weight Control Registry (NWCR), which only includes people with medically documented weight losses of at least 30 pounds that were maintained for at least a year. While the members lost and keep the weight off in a variety of ways, most report continuing to maintain a low-calorie, low-fat diet and doing high levels of physical activity. Among the NWCR members:

In one study, NWCR subjects spent significantly more time per day in sustained bouts of moderate-to-vigorous physical activity than their overweight counterparts (41.5 ± 35.1 min/day vs. 19.2 ± 18.6 min/day) and marginally more than normal weight adults (25.8 ± 23.4), so they were actually getting more daily exercise than most people (2). A 10-year observational study of self-reported weight loss and behavior change in 2,886 NWCR participants (78% female; mean age 48 years), and more than 87% were still maintaining at least a 10% weight loss after five and ten years (3). Even though decreases in leisure-time physical activity, dietary restraint, and frequency of self-weighing, along with increases in percentage of energy intake from fat and disinhibition, were associated with greater weight regain, the majority of weight lost by NWCR members has been maintained over 10 years.

Others have reported that the differences in total weight gain in subjects being overfed similar amounts of calories was likely due to the total amount of daily movement that they engaged in, including standing, fidgeting, and taking more steps, not just doing planned physical activities (4). Weight maintenance may, therefore, as influenced by total daily activity that is not necessarily reported or measured like most moderate and vigorous exercise is.

Weight maintenance may also be as simple as staying on top of body weight. NWCR studies have shown that consistent self-weighing may help individuals maintain their successful weight loss by allowing them to catch weight gains before they escalate and make behavior changes to prevent additional weight gain, and decreased self-weighing frequency is independently associated with greater weight regain (5).

Clearly, the body is a complex system with many different bodily and environmental factors adding to the mix. In the TBL study, there was no indication that they controlled for the potential effects of the last bout of exercise on resting metabolic measures (at least this was not reported on in the study), although exercise can impact metabolism for 2-72 hours afterwards (6). They did not measure or report on the types of foods that the “biggest losers” were eating, although fiber is known to improve the gut microbiota and may be related to successful weight loss and maintenance (7). While many reported being active, doing cardio training versus resistance can have differing impacts on muscle glycogen storage, muscle mass, and insulin action, as well as resting metabolism, and the type of activity done was not reported in TBL study.

So, before we jump to any conclusions and blame all weight regain on something completely outside our control (a lower resting metabolism) and relinquish all personal responsibility for weight maintenance, make sure to consider all of the other potentially confounding variables that have not necessarily been well studied at this point. Let’s not just rely on and sensationalize the results of one small pilot study of “biggest losers,’ but rather take away lessons learned from the successful maintainers who are members of the much more reality-based NWCR.