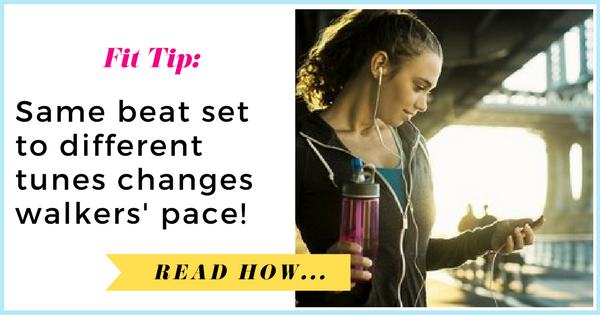 Personal tastes in music have little to do with how we keep time to a tune while walking, according to research published July 10 by Marc Leman and colleagues from Ghent University, Belgium in the open access journal PLOS ONE.

Most people synchronize their steps to the beat of their tunes when they listen to music on a walk. In the current study, researchers found that even when excerpts of music had identical tempo and beat, other acoustic features influenced walkers’ stride and speed.

Participants in the study heard samples of 52 different types of music that all had the same tempo and a 4-beat meter during a walk, but their stride lengthened in response to some tunes and was shorter in response to others. These differences in stride caused an overall difference in the pace of their walk.

After the experiment, participants rated the music they had heard with bipolar adjectives like bad or good, aggressive or tender, familiar or unfamiliar. Music which increased walking speed the most was most frequently rated bad, aggressive, loud or fast, whereas emotions, familiarity or taste had little correlation to the music’s effect on pace. Pop-techno sounds were more prominent in the excerpts that increased pace, compared to jazz-reggae on tunes that decreased walking pace. Leman adds “Music tones up or tones down your walking stride depending on musical style, even when the tempo is the same. This offers perspectives for sports and physical rehabilitation.”