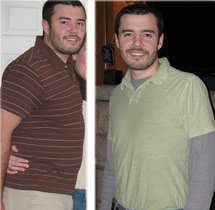 Male Weight Loss Success Story: I Dropped 53 Pounds Together With My Family

Personal life: “I am a devoted wife and mother,” said Gold. “I am a small-business owner in metro Atlanta.” She and her family live in Douglas County.

Turning point: “On Nov. 26, 2007, after Thanksgiving, my mother and I were sitting on the sofa reflecting over the holiday events,” she said. “Suddenly she said, ‘You’re breathing like you’re gasping for breath. I’m very concerned about your health. Instead of you taking care of me, it looks like I’m going to be taking care of you.” Her mother suggested she join Weight Watchers.

Diet plan: A typical day starts with Greek yogurt and fruit for breakfast. For lunch, she has fish with broccoli and a baked potato. Dinner is a salad and lime spritzer to drink.

Exercise routine: She does cardio five times per week, resistance training three times a week and belly dancing two times per month. For flexibility, she does tai chi daily.

Biggest challenge: “My well-meaning friends were saying I didn’t need to lose any more weight — I have learned to ignore comments that put me at health risks,” she said. “… I have made a lifestyle change.”

How life has changed: “My doctor stated that I have prevented nine diseases and increased my life expectancy by eight years. No more obesity, hypertension, back or leg pain,” she said. “I have more energy, more self-control and less stress. In 28 months, I went from a size 28 to a size 8 and I look and feel great. When I power-walked in the park, I would always pray and quote Emerson: ‘That which we persist in doing becomes easier, not that the nature of the task has changed but the ability to do has increased.’ ”

Gold was one of 100 first-prize winners to be named Weight Watchers’ 2010 Role Models of the Year. To celebrate, the company donated 150 pounds of food, equal to her weight lost, to Good Samaritan Food Bank as part of their third annual Lose for Good campaign.