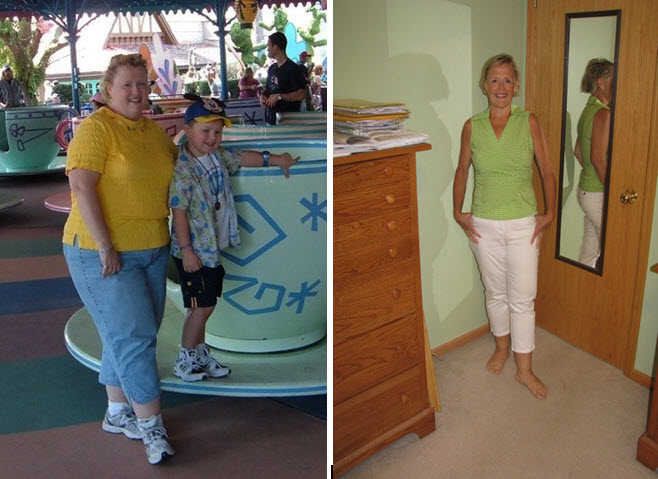 I have been overweight since childhood and with so many failed diet attempts, I expected my remaining years to be short lived, with serious health problems and limited mobility. That lifetime dream of having a lean and healthy figure and weight loss transformation was fading. But opportunity knocked when I least expected it, a childhood dream became a reality, and doors began to open.

From my early childhood, I was always the fat, chubby kid, the one everybody teased so I turned to food for comfort. I had always been ashamed and embarrassed of how I looked and, out of desperation, was always in search of a fast result to lose weight. I tried just about every diet program out there and was always left frustrated from the lack of promised results.

I had been on diets since I was eight years old so I knew a lot about dieting but at some point my determination would stall and the pounds soon rebounded. At 5’1” and 287 pounds, I even considered weight loss surgery as the sure fix but felt that wasn’t my answer, so I continued to forge ahead in search of the miracle weight loss promise that might finally work for me.

Besides being overweight as a child, I suffered with chronic infections of the ears, bronchitis and sinuses. Through the years various doctors had conducted allergy testing which revealed numerous environmental allergies. In 1995 I had two sinus surgeries followed by years of bi-weekly allergy shots, yet I didn’t get better — in fact I got sicker and the weight continued to creep up.

After countless drug reactions to fight through bad sinus infections with antibiotics and steroids, we were running out of options and medications. In September of 2010 my ear nose & throat specialist proposed we explore an elimination diet to determine if I had any food sensitivities. While allergy testing had not revealed any food allergies, there was a remote possibility that certain food sensitivities could be contributing to my chronic problems.

Less than six months later I was sick again and had to deal with another antibiotic reaction, so I decided it was time to explore my doctor’s suggested elimination diet (a/k/a Paleolithic eating). So I followed the diet to the letter and was surprised to discover that at the end of the two weeks I no longer had a sinus headache or nasal congestion but I had lost 13 pounds.

With finally feeling better and a weight loss like that, I decided to not make any adjustments, so I continued on with the elimination diet. Six months later I had lost 75 pounds! I maintained the weight loss for the next six months while beginning regular exercise.

The elimination diet for me revealed sensitivities to dairy, grains, corn products, some nuts and tomatoes (the sensitivity to corn products means I am unable to eat most processed foods).

It had always been a childhood dream of mine to attend a boot camp. In early 2011 I read about a new boot camp on Minnesota’s north shore. The timing couldn’t have been better because I was mentally and physically ready to challenge myself and before the end of the week I had booked my week long reservation. My childhood dream would become a reality! The boot camp was where I also learned more about exercise, a different approach to eating, as well as how determined I was to achieve a lifetime goal.

I left the boot camp confident that I had the right tools at my disposal and had met an amazing group of people to motivate and inspire each other. Shortly thereafter I found an online nutritional consultation service that I signed on with.

Week by week, the pounds and inches just seemed to melt away. It was truly amazing how easy things were once I had a nutrition and exercise plan to follow that actually worked with my body. My husband and son, along with my boot camp friends, were vital to my success as they encouraged me along every step of my journey!

As I began to approach my goal weight I discovered things were suddenly happening for me – my emotional attachment to food was waning, and after digging out from the shame and embarrassment I had been hiding behind, I could finally begin to accept the new me that was waiting for me in the mirror. On April 21, 2012 I celebrated reaching goal and my lifelong objective finally being achieved: losing OVER 150 POUNDS!

Now I’m forging ahead with a new perspective and adventure to my life. I continue to remain dedicated to my nutrition by honoring a Paleolithic diet and eating organically. Daily exercise is my top priority which means I am up before 5:00 a.m. to ensure my workouts are not missed. I joined a women’s hockey team as well as joined my employers running club, running my first 10K in April 2012. In August 2012 I ran my first half marathon with a group of women who I met at the boot camp.

Countless times each week people tell me how my weight loss transformation has motivated and inspired them to either alter their eating habits, increase their exercise, or begin their own weight loss transformation. I no longer worry about embarrassing my son with my size; instead I make him smile when I play hockey, or help out at soccer or football practice. My husband who has always loved me for me sees how much happier and more confident the new me has become!