How to approach your boss about a treadmill desk 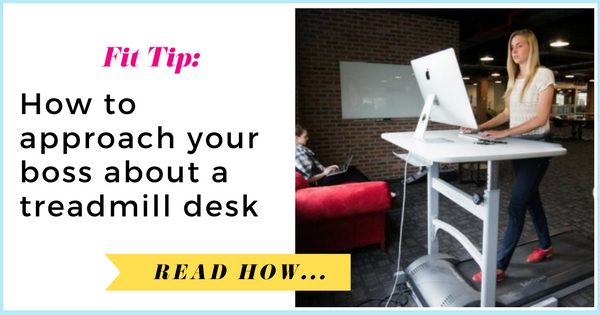 If you happen to be interested in using a treadmill desk, your greatest challenge may be convincing your boss. Fortunately, two BYU researchers have good news: People on treadmill desks perform cognitive tasks nearly as well as those at sitting desks, despite the fact that they’re walking.

In a study published in PLOS One, exercise science professor James LeCheminant and neuroscientist Michael Larson report their findings after putting treadmill desks to the test. The duo compared the cognitive performance of healthy adults sitting at a desk to those using treadmill desks while carrying out the same tasks.

While they found the walkers showed slight decreases in processing speed, attention and typing words per minute–tasks that require fine-motor skills or heavy concentration–the overall drop was not enough to warrant major concern.

“Though statistically significant, we are not talking about major differences between the treadmill walking and sitting conditions,” LeCheminant said. “Rather, these are very modest differences.”

In other words, the health benefits of a walking desk shown by previous research appear to outweigh the slight drop in productivity that comes with such a setup.

LeCheminant and Larson strongly support the use of treadmill desks, sit-stand desks, and any other efforts to safely improve physical activity in the work place. In fact, Larson is planning on getting a treadmill desk himself in light of his research.

With that in mind, here’s a quick list of things treadmill desk hopefuls can tell their boss (based on previous research as well as LeCheminant and Larson’s findings):

Academic research supports them as a way to increase physical activity at work Thinking abilities only drop slightly when using one, but not below average performance marks Sitting at a desk all day could be shaving years off your life A neuroscience professor at a research institution is getting one after studying them

“For health alone it’s great, but if the cognitive decline is small, than you bet it’s worth it,” Larson said. “The health benefits likely outweigh any slight performance dips you may get from implementing the treadmill desk.”

For the study, the duo and their BYU student team assessed 75 healthy adults, half using treadmill desks, half using regular desks, for a 45-minute period. The 37 people on treadmill desks walked at a speed of 1.5 mph. Walkers saw a 9 percent drop in cognitive processing speed, attention and working memory and a 13-word-per-minute drop in typing.

Their findings show that treadmill desks may be most appropriate to use during tasks that are less cognitive-demanding (checking email) or do not require a great deal of fine-motor skills (non-typing tasks).

Larson said professor friends who use treadmill desks step off when they have a task that requires high concentration, such as intense reading and editing. That said, researchers were surprised to find treadmill walkers retained their learning just as well as sitters, even if it took them longer to process it in the first place.

“They’re not going to get it as fast, but in the long run they’re going to get it,” Larson said. “While walkers don’t learn as fast as the sitters, they were able to retain the information as well later on.”

Researchers say there is room for much more exploration on the subject. One question their study did not address was whether individuals improve their cognitive performance or typing performance with practice on a treadmill desk over time.

“Simply put, we still need to have more data to determine the effectiveness of treadmill desks for a host of other outcomes related to cognition and productivity,” LeCheminant said.