ANYTHING is Possible with hard work 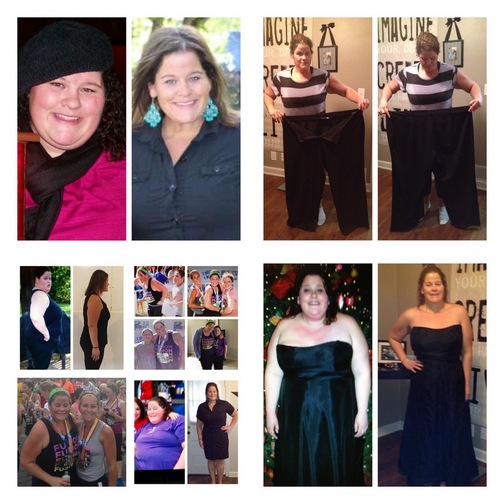 My name is Kristin and I am a 33 year old single mother from Kansas City – I’d like to share my successful and healthy story of losing 155 pounds.

Looking back, I have been overweight since sixth grade – in my junior high school picture I wore a Lane Bryant sized 14/16 dress, and by the time I entered high school I was all the way up to a 22/24. Though I played sports and stayed active, the freshman 15 hit me when I
started college – and then some. Sporadically in this stage I joined Weight Watchers more times than I can count, did the Atkins diet a few times and lost 50 pounds here and there – though the weight never stayed off because each loss was never a lifestyle or a permanent change.

When I had my son in May of 2002 at 21, I was about 265 pounds and he was born eight weeks premature with some serious health issues. I was young and nervous and raising him all alone. Stress eating definitely set in. Over the years I had gained and lost the same 25-50 pounds over and over again – all the while making several attempts to get Lap Band surgery and trying out for the Biggest Loser six times. I truly felt there was absolutely no way I would ever be able to lose the amount of weight I faced without doing something extreme.

At my heaviest in 2010 I was 359 pounds. I was 30 years old and so overweight that my knees felt like a 60-year old – I would be winded climbing one flight of stairs. I would take my son to the circus or Disney on Ice and have tears running down my face in the dark because the chair was so tight. I took a flight once and was mortified when, as loud as possible, the flight attendant pointed out, “you’re definitely going to need an extension.” As much as I like the physical transformation I have made, the simple things mean just as much – like not fearing an attendant’s loud exclamation. Or not worrying about whether you will fit in a booth at a restaurant or whether the chairs at the party can hold your weight. All things most people never even consider.

I finally decided to join a diet center, but it was very strict and not realistic for lasting long term, so I quickly gained back some of the weight I was losing. I then started working out at my gym, began to get stronger, and was to the point where I could do the gym’s spin and cardio classes. I then started a boot camp program in September of 2012 with a local fitness studio in Kansas City – Fusion Fitness – and things have never been the same. I had never done a burpee or side plank in my life and within the first month of boot camp I was doing them all the time with no problem.

A little over a year ago, not long after starting the boot camp, I weighed in under 300 pounds and I decided my next challenge was to try my first 5K – it was so hard but I promised myself I wouldn’t stop – and I didn’t. After that accomplishment I was hooked. I’ve gone on to run several 5K’s, a 10K, a triathlon, and have a 15K scheduled this November. I have never felt better in my life! I’ve told people time and time again who assume the smaller size is all about looking better and having more options with clothing – that part is great – but feeling like you can do anything trumps it all.

I spent so many years on the sidelines while people were doing races or trying things that I knew were physically impossible at 359lbs.Those days are over. I will continue pushing myself past my comfort zone – there have been so many surprising moments along the way as I’ve watched myself do things that seemed impossible – this is the best feeling in the world.

I will continue to work hard and instill in my son that we can do anything and have anything as long as we’re willing to work for it.

RELATED:   Weight Loss Success Story: "I'd been taking my health for granted for way too long!" Laura Lost 120 Pounds

It has now become my goal to find a way to inspire, motivate and help other very overweight women and teens. People who are in the position I was in and feel like they have no hope. I want them to see a real example of a person who has achieved these goals through hard work – and that it’s possible for them to do it too. People look at me and say, “you’ve lost 155 pounds! You must have never had a ‘bad’ day!” But I want to talk about the importance of, first of all, that we all have bad days – everyone has slips – and secondly, it’s the way we pick ourselves right back up and get back to work that defines us. The women I’ve met through the boot camps and at the gym have become like sisters – we all motivate and look out for each other, encourage each other and are there to celebrate the victories and pick each other up on the rough days.

I’m extremely thankful I didn’t do something extreme or have surgery – if I didn’t work this hard and give it everything I had, I would never have reached where I’m at physically and the level my fitness has evolved to – or have the appreciation for all the effort I’ve put in to changing my life.

I have documented a lot of this journey on my weight loss page on Facebook, putting myself, my struggles, and my achievements out there for people to read about, relate to and hopefully gain encouragement in their own journeys. It’s all worth every up and every down! Here is the link to my Facebook page, Kristin’s Weight Loss Journey, and thank you for reading!