Male Before And After Weight Loss: Anthony Lost 160 Pounds After A New Year’s Resolution 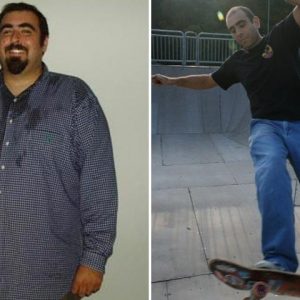 How I Gained It: I remember starting the fifth grade after gaining weight over the summer and kids at school asking me how I became fat. I have no idea how I gained weight that summer, but I do know that it stayed with me. I struggled with my weight for the rest of elementary school and through high school and college. I went through short phases at different points in my life where I would lose some weight, but somehow it always came right back. The situation got even worse when I started working at a sedentary job. Even though I was heavy, I was still a relatively active person; I could skateboard, snowboard, hike, bicycle and ride motorcycles all pretty well. However, I gained a few extra pounds every year, and, before I knew it, I couldn’t sit in an armchair or fit in small cars. I had to ask for a seat belt extension when flying on an airplane. I started taking medication for high blood pressure; my weight was having a negative impact on my life.

Breaking Point: At age 33, and with my second son on the way, I applied for a 20-year term life insurance policy and was denied. This was a huge wakeup call for me. The thought of not living to see my unborn son’s 20th birthday was really scary. At that point I knew I had to lose weight and become healthy, I just had no idea how to do that. By that point in my life I had already tried and failed at almost every weight loss diet or strategy that I was aware of. I knew I needed to try again, I knew I needed to do something, I just had no idea what that should be.

How I Lost It: I started at the beginning of 2006, like many others, with a New Year’s resolution. I vowed to give up soda and sweets and set a goal to lose 50 pounds by the end of the year. I knew I would have to figure out how to lose the weight as I went but thought this would be a good start. After almost three months of sticking to the plan and not having a sip of soda or a taste of sweets, I still had not lost a single pound. I was frustrated and becoming depressed, but I was determined to find something that would work. I eventually found a book titled Eat to Live by Dr. Joel Fuhrman. I began following the guidelines and changing my diet immediately. I ate more fruits and vegetables than I thought possible and not much else, and I started losing weight! By the time my son was born — only two months later — I had already lost 30 pounds! I continued to increase the amounts of vegetables and fruit in my diet, and also cut back on processed food, and sustained a steady weight loss of almost exactly eight pounds a month for the next 17 months.

In January of 2007, after losing almost 100 pounds, I decided to try running. I began with a combination of walking and jogging until I was able to complete one mile, then two, then three. I continued eating well and increasing my running. Nine months later, I ran a half-marathon in one hour and 48 minutes. Even with my increased exercising, I continued to lose almost exactly eight pounds a month until September 2007, when the weight loss stopped almost as suddenly as it began.

Weight is no longer an issue for me. I have been steady now at 200 pounds for more than four years! I still run regularly, and skateboarding, snowboarding, hiking, biking and riding motorcycles are all so much more enjoyable now. In addition to losing weight, I am off blood pressure medication, have more energy than ever and wake up every day feeling absolutely great!

Related Items100 Pounds LostjoggingOver 100 Pounds LostrunningSEOwalking
← Previous Story Men Before And After Weight Loss: Eric’s 40 Pound Weight Loss Journey
Next Story → How I Lost 119 Pounds: Tim Lost Weight With His Wife By His Side