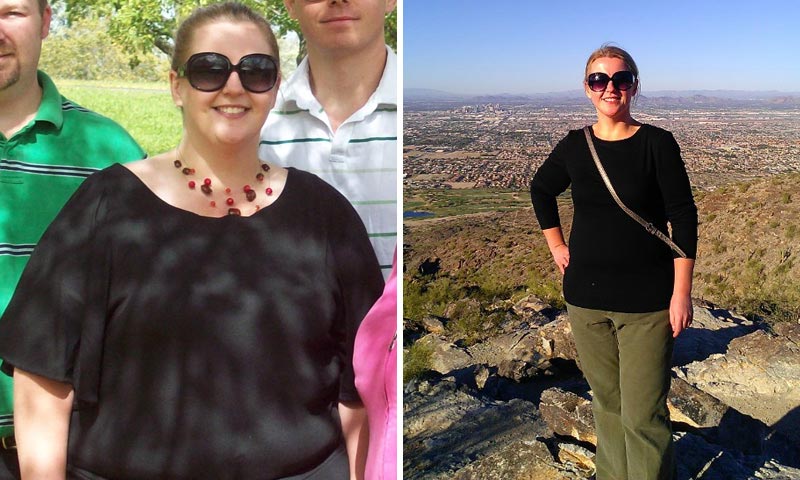 How I Gained It: I have struggled my whole life with my weight. I was always the biggest girl in school. I never played sports because I was too scared I couldn’t keep up. I was teased on a regular basis (even by family members) from the age of 4.

I met my now-husband in 2004. He had also struggled with his weight. Food became our entertainment; we would eat at Taco Bell at 2 a.m. just for something to do. By our first wedding anniversary in 2008, I had ballooned to my heaviest weight at 311 pounds.

I tried many diets, but nothing stuck. I would lose 25 pounds and gain 30 back; I figured I would be heavy for the rest of my life. But my health was starting to suffer. I was pre-diabetic, my cholesterol was borderline-high, and I was taking five pills a day for my blood pressure. I was also suffering from severe anxiety and unexplained infertility, which my doctors believed was due to my weight.

Breaking Point: I went as far as to schedule gastric bypass surgery in August 2010, just so I could do something lasting about my weight. I was sick of not being able to buy clothes off the rack. I was sick of feeling sick all the time. I was sick of looking at myself and not liking what I saw. I was sick of not feeling attractive to my husband. I felt hopeless; when you weigh that much, you feel like there is no alternative.

RELATED:   Weight Loss Before and After: Michelle Lost 51 Pounds And Ditched The Muffin Top!

But after seeing people who had the surgery who later gained back all the weight, I knew even gastric bypass wouldn’t solve the problem. I was too young and too healthy to lose weight like that; I had to be able to prove to myself I could do it on my own. Plus, I really could never accept the fact that my stomach and body would never be the same after surgery. Why put my body through something that can be avoidable?

How I Lost It: After my husband lost his job near the end of 2010, we decided to leave our home in upstateNew York and move across the country toPhoenix,Arizona for a sort of “new beginning.” We decided since we were starting fresh in a new place, we could take control of our health too.

I stopped eating processed foods, limited my carb and fat intake, and cut my total calorie consumption to just 1,300 a day. I go to the gym every day (sometimes even twice a day on weekends) and discovered I love exercising! I allow myself a “cheat” day now and then, but I have found I don’t need to splurge as often because I really love how I feel when I eat healthier.

Along the way my husband also lost a lot of weight: When we started, he weighed 377 pounds. Today, he weighs 269 pounds!

One of my favorite things to do now is run. A few months into my lifestyle change, I decided I wanted to be able to run a 5K race by my 30th birthday. I trained and focused on my goal, and when I crossed that finish line on November 19, I burst into tears. It was something I never thought I’d be able to do. Our journey is far from over, but I’m no longer on medication and I have never felt so good in my entire life.