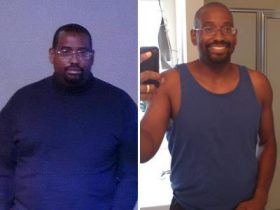 How I gained it: My journey into obesity began in childhood. Nutrition and activity was never a focus in my household, so growing up I never learned the foundations of a healthy lifestyle. As far back as I can remember I was always the “big girl.”

My kindergarten photos showed a big smile and a little pot belly to match. As I progressed through school the trend continued, worsening with each passing grade. The smile faded and the belly grew. I was bookish, artistic, and somewhat of a loner. I turned to food for company. I would sneak treats at a young age when my Nana wasn’t looking and as I grew up the behavior persisted.

In my high school and university years I treated every day as an all-you-can-eat junk food buffet. It wasn’t uncommon for me to eat a container of ice cream, a family sized bag of chips, two liters of pop and a half dozen snack cakes in one evening while I sat alone in my room with the television on. Needless to say, this lifestyle left me unfulfilled. In university, I would see people around me smiling and laughing but I couldn’t remember the last time I’d smiled and truly felt happy. Slowly I spiraled into a depression and continued to use food as my comfort. By March 2007, I was 22 years old and weighed in at an even 300 pounds. I knew I was heavy, but seeing 300 on the scale was eye-opening — to say the least. Is this really how life should be? How can I be so young and feel so old?

Breaking Point: In May 2007 I experienced a health scare that set my journey in motion. I developed an infection of my heart sac followed immediately by a blood clot in my right arm. For the first time, I heard a medical professional refer to me as “obese” and it made me sick to my stomach. Doctors told me that weight was likely a contributing factor and suggested that I “drop a few pounds.” The prospect of change terrified me -– I knew how to be unhealthy and I was darn good at being fat. My depression worsened and for the first time I was placed on anti-depressants, I began seeing a psychologist and at my worst I had contemplated suicide. After months of treatment I wasn’t getting any better. It was then that I realized that medication and therapy was like putting a Band-Aid on a bullet wound — not so effective when you’re hemorrhaging, right? I had to deal with the root of the issue: I hated my body and I hated that I was responsible for what it had become. I longed to have self esteem and to finally feel comfortable in my skin. I wanted to be in control of my health and my life so I began making changes in November of that year.

I went full throttle with gym memberships and health food stores and I dropped 50 pounds in about four months. Despite the success, I still didn’t have a good grasp on balanced eating and I often succumbed to cravings. I was quickly running out of ideas in both the kitchen and the gym and my weight loss had stalled. Following the passing of my uncle in August 2008, I quickly gained back 30 pounds. I was slowing sinking back into the black hole I had been trying so desperately to crawl out of. I remembered what that abyss felt like and I promised I would never allow myself to experience that level of hopelessness again. I had tried it alone and I had failed, but it wasn’t over for me yet.

How I lost it: What was missing for me was accountability and variety, so I joined L.A. Weight Loss in January 2009. Their focus is on making smart food choices, portion control, and adopting healthy food preparation methods, plus I could use grocery store foods. I learned a lot about smart whole eating and quickly began to see weight loss return. I learned new coping methods and finally figured out how to balance competing demands of diet and everyday living. I remember being so excited to learn that a diet program doesn’t mean that life is over: “What do you mean I can still eat cake? This thing just might work!” My boyfriend supported me and helped me learn new things in the kitchen. We were trying new foods and I was taking control. I began reincorporating exercise into my regime to keep the scale steadily dropping. Within one year I had dropped another 100 pounds and was at the gym at least three times per week.

Since that time, I have continued to drop weight and reshape my body. I have maintained a total 135 pound loss and have incorporated fitness into my daily life. I do CrossFit, kettlebell circuits, bootcamp, spin, yoga and swimming. I now work out six days a week, sometimes twice per day. I no longer exercise because I have to, but because I truly want to. This year I completed my first triathlon, and I regularly run anything from 10K to ultra-marathon race distances. (And if you’re wondering, that’s any race longer than a marathon.) To go from 300 pounds to an ultra-runner in three short years is certainly surreal. I’ve realized that the body will do what the mind tells it to and that limits are self-imposed. I love who I have become in this process and I am so thankful that I made the change. I love the thrill of achieving a long-standing goal and I use that as my motivation to continue each and every day. Even at my goal weight I continue to set myself big, hairy, audacious goals. If someone says I can’t do something I turn around and do it. Twice. I embrace a challenge and no longer live a life of fear. Whatever it is, I’ll be ready for it! I never thought I’d get here, but now that I live a life of positivity, I’ll know never go back.