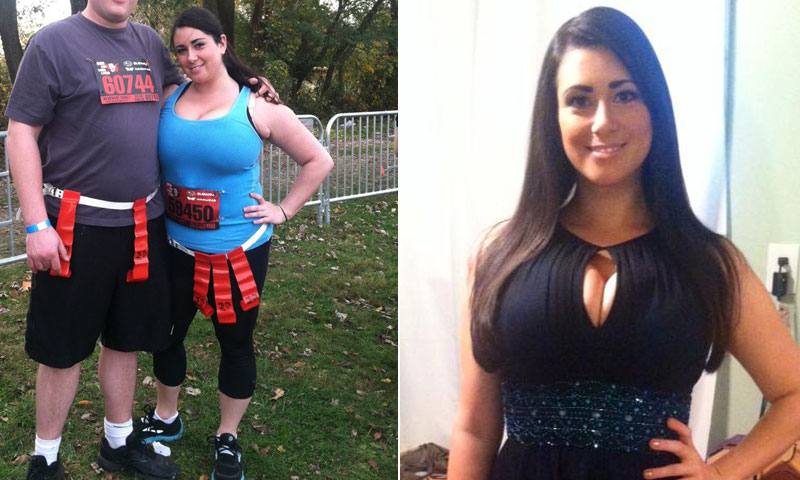 I had gained most of the weight 10 years ago, then packed on 40 more pounds during pregnancy. My daughter is now 8, so pregnancy weight is no longer an excuse! I’m a carb girl, so I loved eating bread, pasta, cake, cookies. I hated veggies.

I had been trying to lose weight for years, but I just couldn’t do it. I even signed up for a 5K obstacle course to motivate me. I went from only being able to run one lap on a track to running 14 laps, yet still managed to gain weight — and it wasn’t muscle. My daughter told me she was embarrassed that she had a “fat mom.” It broke my heart!

I knew something was wrong from my failed weight loss attempts, so the next time I went to my gynecologist, I requested blood work. I had read that my polycystic ovary syndrome (PCOS) could cause insulin resistance. Well, I was correct! The test results showed that I was insulin resistant and possibly had type 2 diabetes.

How I Lost It: I took matters into my own hands. I researched online diets that helped people like me. I came across the Metabolism Miracle diet. I read the book, bought all the recommended food and vitamins and on January 7, 2013, I started my journey. Within the first two weeks, I was already down 15 pounds. It was mostly water weight, but still progress. It helped me keep up the momentum. My 2 p.m. blood sugar crashes ceased, and my energy levels increased. I followed the diet strictly. If I was tempted to cheat, I would remind myself that I can’t fool my body, it knows what I’m putting into it. I’m a very picky, very bland eater, but I learned my lesson: The junk food isn’t worth it, it sucks the energy out of you.

I went to the gym to use the treadmill and elliptical every day after work, as if it were my part-time job. I chose a gym close to home to eliminate excuses. If my daughter was at Brownies or gymnastics, I would drop her off and hit the gym until it was time to pick her up. Other days, she went to childcare at the gym. She loves it there, so that makes things a lot easier. Also, I walk three miles, two to four times a week on my lunch breaks. To change things up, I do kickboxing and go for bike rides.

By February 21, I had lost 30 pounds. That day marked the beginning of a “Biggest Loser”-style contest at my job. I signed up, even though people said I had already lost enough and wouldn’t win. Wrong! I came in first place. It ended on May 9, and by then I was down 55 pounds. I had exceeded my original goal of 50 pounds. I then changed my goal to 60, then to 70. By mid-July, I hit 71 pounds down! I never thought I would see the day.

I’m happier, healthier and I finally feel human. I always felt like a beast next to my friends. I’m less paranoid of being judged for my weight now. I will admit I am still insecure because of skin and stretch marks on my stomach, but it sure beats being obese.

Current Weight: 133 pounds. I would like to get down to 127 and then maintain, but I am satisfied with where I am now.