Home » Before And After: After a Lifetime of Battling the Scale, Caroline Lost 140 Pounds 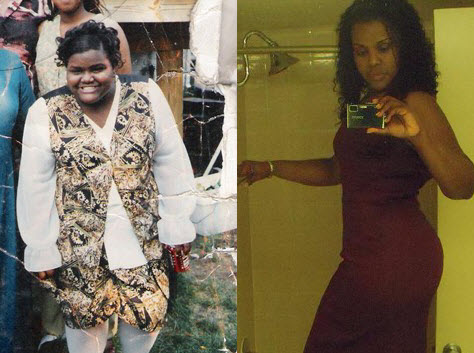 How I Gained It: As a child and even now, people often ask, “How did your parents allow you to get that big?”

But it wasn’t my parents’ fault — they tried everything from putting me in dance and exercise classes, to stocking our cabinets with “healthy foods,” to enrolling me in a pediatric medical weight loss program at the Children’sNationalMedicalCenter. I resisted. In the middle of the night, I would get up while everyone was sleeping and binge on all the leftover food my mom made for dinner. I was also a bit of a food hustler at my Catholic grade school — I would trade stickers and glow-in-the-dark pencils for my classmates’ junk food. When I came home from school, I would pretend that I had forgotten my keys and was locked out because my elderly neighbors would feed me sandwiches and cake. Yes, I was just a kid and didn’t have money or a job, but I made every effort I could to get the food I wanted.

I also had poor coping skills. Growing up, I had to deal with the tragic death of my two teenage cousins and the absence of my father after my parents’ divorce, and my therapy of choice involved plenty of Hot Pockets and Hostess cupcakes. I was angry at both the world and God for these things, but I was the victim of my own punishment.

Breaking Point: There was no major incident that caused me to have an aha moment, but I remember one day when I was visiting home from college, and I just suddenly said to myself, “I had enough!” I was sick of wearing girdles to fit into certain outfits and sick of being the girl that guys never acknowledged. I had not worn a bathing suit since I was nine years old, I was never able to ride a roller coaster because the safety bar did not fit over my stomach, and I did not have my first boyfriend until graduate school. Being obese had caused me to miss out on enjoying simple things in life.

How I Lost It: At first I started doing moderate walking outside in areas that had lots of hills. Over time, my body started to crave more of a challenge, so I joined a gym and worked with a personal trainer for two months to provide guidance on how to use various machines around the gym. I began using machines like the elliptical trainer for 45 to 60 minutes six days a week while weight training every other day. These days, I do a high-intensity, arm-swinging, high-incline, high-speed walking on the treadmill for an hour every day. ButRomewas not built in a day; it took me years to get to this level of exercise intensity!

In addition to exercise, I began scouring the Internet for low-carb alternative recipes to many of the foods I love. Losing much of my weight and keeping it off has been the result of limiting my intake of white foods; I avoid or limit flour, sugar, dairy, bread, rice, pasta and potatoes.

I do my best to cook and eat my own food. Not eating out as much and acting as my own personal chef is the only way I can really know exactly what I’m eating. Often times, restaurant appetizers and entrees are loaded with high calorie sauces, marinades and preservatives that aren’t always listed on menus.

It took me a year to lose the weight and another year to learn how to keep it off. And as I’ve gotten older, I’ve experienced plateaus and the dreaded metabolism slowdown. I deal with that by switching up my fitness routine and changing my eating habits. It works for me!

Caroline has maintained her weight loss for eight years. Read her recipe and diet tips by checking out her personal website.