Home » Weight Loss Success Story: African-American Women Must Eat Less Or Exercise More To Lose As Much Weight As Caucasians 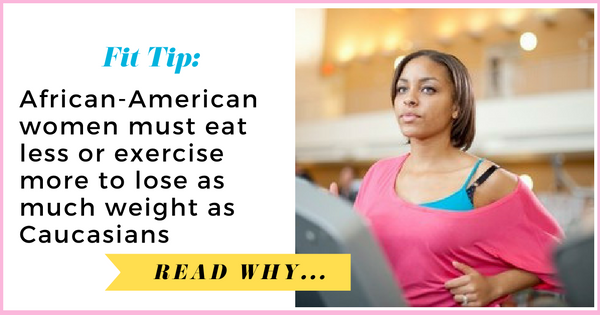 African-American women may need to eat fewer calories or burn more than their Caucasian counterparts to lose a comparable amount of weight, according to researchers at the University of Pittsburgh School of Medicine in a study published online today in the International Journal of Obesity.

“At first, it was thought that perhaps the African-American women didn’t adhere as closely to their calorie prescriptions or that the interventions were not culturally sensitive,” he said. “But even in research projects that were designed to address those possibilities, the difference in weight loss remained.”

Dr. DeLany’s team decided to see if there were metabolic reasons behind the discrepancy by examining body weight changes, energy expenditure, physical activity and energy intake among 39 severely obese African-American and 66 Caucasian women who were participating in a six-month weight loss program of calorie restriction and increased physical activity. They measured body composition and daily energy expenditure at the beginning and end of the intervention period and assessed physical activity levels using multisensor activity monitors. By combining these measures, they obtained objective assessment of intake during the intervention.

The researchers found that the African-American women lost about seven pounds fewer than the Caucasian women, even though their starting body mass index, or BMI, measures were comparable and they followed as closely to the calorie restriction and activity prescriptions. But the African-American women had lower resting metabolic rates and expended less energy daily than the other group.

Calorie prescriptions are typically calculated by determining how many calories are needed to fuel the body’s basic physiological processes and adding the calories needed for other activities. To maintain weight, calorie intake and output should be equal. If more calories are burned than are taken in by eating, weight loss should occur.

“We prescribe how many calories are allowed and how much activity is needed during weight loss interventions based on the premise that people of the same weight have similar metabolic rates,” Dr. DeLany explained. “But to account for their lower metabolic rate, African-American women must further reduce the number of calories they eat or use up more of them with exercise in order to lose the same number of pounds in the same time span as a Caucasian woman of the same weight.”